On the Incarnation by Athanasius 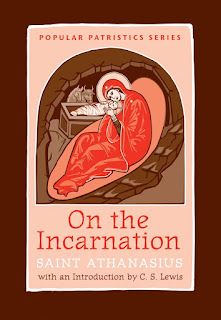 Interesting, informative, helpful, fresh, original. In his time, setting, and culture Athanasius wrote an incredible book explaining and defending (no, going on the offensive) the meaning, purpose, and truth of Christ's incarnation in history.

This is not simply a book on the incarnation, i.e., the joining of the human and divine nature. It is substantially a book on the death of Christ. For Athanasius, the incarnation (rightly understood) is principally about the death of Christ, for the divine Son put on flesh and blood so that He could lovingly sacrifice Himself on our behalf and so deliver us from the condemnation of death. Thus, Athanasius's On the Incarnation is one of the earliest Christian theologies on the Atonement ever penned.

The pace of the book is fast, and the content remains on subject and stays interesting. Athanasius was a brilliant author who knew how to keep to his subject. His sensitivity to this is shown in the beginning of chapter four: "You are wondering, perhaps, for what possible reason, having proposed to speak of the Incarnation of the Word, we are at present treating of the origin of mankind. But this, too, properly belongs to the aim of our treatise. For in speaking of the appearance of the Saviour among us, we must needs speak also of the origin of men, that you may know that the reason of His coming down was because of us, and that our transgression called forth the loving-kindness of the Word, that the Lord should both make haste to help us and appear among men."

Athanasius is completely on point in locating the chief necessity for the incarnation and death of Christ in God Himself. God created human beings as His special creation, with an exalted position and destiny. However, through the devil's deceit and the wickedness of man, humans fell from their position and incurred the condemnation of death. God had given them commandment, and the penalty for breaking His commandment was death. The punishment of death is therefore an inflexible law that cannot be broken.

Yet on the other hand, it would not be proper for God to allow His special creation to be lost, to not fulfill the purpose for which He had made them. Furthermore, God, being a loving and good God, had pity upon humanity and desired their salvation.

But this desire for their salvation and for the fulfillment of their destiny, coupled with the inflexible law of God regarding the punishment of death for sin, produces a dilemma. How can humanity be saved? How can God restore humanity without compromising His own law, and therefore His own integrity? Athanasius is keenly sensitive to the problem: God must be consistent with Himself, to both His law and His love. What then can God do?

The solution, according to Athanasius, is the incarnation and death of Christ. The Son of God would come into the world, being born of a virgin, putting on human flesh Himself, for the purpose of taking upon Himself the penalty of death on behalf of all of humanity. Thus Athanasius firmly plants his feet in the doctrine of penal-substitution, and even uses language such as "substitution" and dying "in the stead of" human beings. By Christ's sacrifice, the perfect One offering Himself to God on behalf of the condemned, He "fulfilled in death that which was required" (9). "For if He came Himself to bear the curse which lay upon us, how else could He have 'become a curse' (Gal. 3:13) if He had not accepted the death occasioned by the curse" (24)? There simply was "no other way" (9). Now, because of the death of Christ, humanity is able to be free from the condemnation of death; believers need no longer fear death, for they have been forgiven and will rise from the dead incorruptible on the last day.

Not only does Athanasius explain the meaning and purpose of the incarnation, in the middle of the book he also answers common objections to the doctrine (even--brilliantly--thinking up some of his own), and the last part of the book is a forceful apologetic (or perhaps "offensive" is a better word) against unbelievers (Jews and Greeks). Against the Jews, Athanasius marshals Scripture after Scripture showing that the life and death of Christ was clearly predicted in their own sacred texts. Thus Athanasius continues the important tradition of arguing for the truthfulness of Christianity by appealing to prophecy. Against the Greeks, he handles some philosophical objections, but then powerfully turns the guns on his opponents, pointing to the powerful proofs of the divinity of Jesus Christ seen in the lives of Christians, as well as the moral and spiritual transformation of the ancient world since the incarnation of Christ. Even today people would do well to consider his evidences.

In Athanasius's day this book must have been a welcomed answer to skeptics and unbelievers. Considering his culture and context, Athanasius's work was truly groundbreaking, providing a needed check to those who mocked the idea and rationale of the incarnation.

I have a lot of praise to heap on this book. I also have some criticisms.

Athanasius's mind is profoundly Greek (as opposed to Hebrew), and so his emphases tend more toward philosophical questions, such as the categories of being and non-being, rather than toward moral categories such as guilt and reconciliation. The Bible undoubtedly speaks of the corruption of God's creation and death--the taking away of life--as central to the drama, yet these concepts are wedded inseparably to the concepts of sin, guilt, wrath, judgment, and forgiveness. Of these latter ideas Athanasius talks little (not because he does not believe in them, of course, but because his mind's orientation is not as interested in them, or did not see the need to emphasize them). The Greek is primarily interested in philosophy; the Hebrew in relationship with God the Person. Granted, if Athanasius is writing to a Greek audience, the Greek concerns would naturally loom prominently, but I believe the work suffers because of it, and would have been better and more Biblical if Athanasius had spend more time discussing the moral world and moral connections. He could, and should, have challenged his contemporaries to think more Biblically, and hence more really. God's inflexible law, requiring the sentence of death upon sinners, was not arbitrarily made, and it did not simply pose a legal problem for God ("Darn, why did I give that command... now I must abide by it to be consistent with Myself"). Rather, it demonstrates the moral nature of God, who judges sin, who hates sin, who reacts to sin with righteous wrath, and is rightly dissatisfied with iniquity, and who satisfies Himself with good and just vengeance wisely distributed. Here Anselm and the Reformed tradition contributes much.

It is true, according to the Bible, that Jesus came into the world to "heal" us, to restore us from our fallen condition (state of being). Yet to simply say this is not sufficient. We are in such a fallen condition not merely because of our sin (departing from the good path), but because of God's righteous sentence of judgment against us on account of our sin. Thus, in order to be healed and restored, not only must our sin be dealt with, but also God's wrath. We don't need to ask: "Did Jesus come into the world to heal the wounded, or to deliver sinners from retribution?" The answer is: yes. On account of God's retribution, justly punishing humanity for its sins, humanity is mortally wounded and needs to be healed. And how are we healed (restored to health and soundness)? Through Christ dying for our sins, paying our penalty, satisfying the law, propitiating the wrath of God, putting away our sins forever, and therefore enabling us to receive God's healing and restorative blessing. The two concepts go hand-in-hand, and we should never think they are antagonistic to one other.

I don't believe Athanasius would deny this, or that he does deny it in his book. He just doesn't talk much about, nor emphasizes, the moral. He errs, not in what he says, but in what he doesn't say.

Also, Athanasius almost completely omits any discussion of how the benefits of the sacrifice of Christ are received by a person. While he certainly mentions "faith" here and there, there is really no discussion of how a person partakes in Christ's salvation, though it is implied that only Christians partake, while non-Christians will tragically find their end in "eternal fire" (56). The book, though admittedly focused on the meaning of the incarnation, would have been better with even a short explanation.

To be fair to Athanasius, however, he does write at the end of the book: "Let this, then, Christ-loving man, be our offering to you, just for a rudimentary sketch and outline, in a short compass, of the faith of Christ and of His Divine appearing to usward. But you, taking occasion by this, if you light upon the text of the Scriptures, by genuinely applying your mind to them, will learn from them more completely and clearly the exact detail of what we have said" (56). In other words, his book is only a preliminary sketch, an skeletal introduction to the great doctrine, and one can find a fuller description and explanation in the pages of Scriptures. This is an important detail to note: Athanasius's work should not be seen as a fully developed theology of the incarnation and death of Christ, and future theologians can build upon the foundation that Athanasius has laid.

I was surprised by how much I enjoyed On the Incarnation. Athanasius was clearly a brilliant theologian, and his life's labors (which God ordained for him to walk in) were a true blessing to the Church and to the world. I highly recommend this classic.
Posted by Eli at 1:57 PM 1 comment: