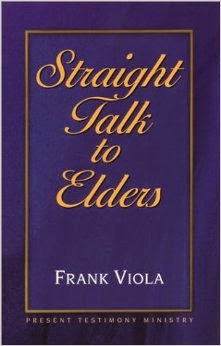 Before reading this book I was not unfamiliar with Viola's message, having some first-hand experience with those who have been deeply influenced by Frank Viola and his teaching on house church. I have seen little-to-no good fruit on account of this mindset. It is, ironically, separatist and elitist.

To be frank, "Straight Talk to Elders" is poppycock. Frank Viola argues in it that the office and role of pastor as we know it is unbiblical and that there should be no official leadership in the Christian Church. Church meetings should operate "organically" without any official leadership--no person or persons in the front leading the congregation in worship. Each member is expected to function in an atmosphere of complete freedom from any human authority. Frank explains the Christian's "freedom in Christ" as freedom from all authority other than the authority of Christ. Now, says he, Jesus is our Lord, and no one else can have authority in our lives. When asked about the authority of fathers in families, the answer is unsettling: the New Testament doesn't mention it and it, too, is probably unbiblical. Thus a beautiful Christian truth, that Christ is Lord, is twisted into a kind of earthly anarchy that would make the apostles roll over in their graves.

Frank's error is that he defines freedom in Christ as freedom from all human authority rather than freedom from the law of God, as the Bible defines it (Gal. 5:1). True Christian freedom is not freedom from the authority of fathers, political governors, or elders in the church, but freedom from condemnation, fear, judgment, and wrath. If Frank had understood this moral/spiritual freedom that Scripture talks about there wouldn't be books like this, nor the damage they create. Frank fails to see that it is the message of the gospel that sets people free. It is the gospel that saves, heals and restores individual lives, not the method of our meetings. The gospel is completely absent from this book, not mentioned on any page. Frank argues that our method of meetings is wrong and if we fixed it then everyone would be set free. He fails to see that it's the message, not the method, that is ultimately important, and if it is the message that's crucial, then the method is less crucial, so long as the truth of Christ is being proclaimed. One may have all the right methodology, but without the gospel of Christ, it is death, not life. The reverse is also true. Frank's understanding is shallow and mechanical.

Frank attempts to provide a basis for his teaching in the New Testament, and in a short space leaps across the epistles, glancing here and there. His argumentation is scant and speculative and at times laughable. For example, in trying to explain away the qualifications for elders in 1 Timothy and Titus, Frank reasons that because Timothy and Titus had been in ministry for a long time already, and since Paul is only now telling them about the qualifications for eldership, eldership, therefore, must not be a big deal! That's right. Eldership is no big deal because the qualification for elders only appears in 1 Timothy and Titus, which were written later in their ministries. Upon this rock Frank builds his church. Frank also argues that Philippians 1:1 is proof that eldership is "no big deal", because elders and deacons are mentioned as a "footnote". "Oh, and by the way, greet those nobodies, too..." Can't you just see how unimportant they are? What then are elders, according to Frank? Elders are nothing more than people who've been Christians longer and have more maturity; they aren't serving in any official capacity; they simply are respectable members of the group, without any more responsibilities than anyone else. That's all. Ordaining elders simply means "acknowledging" them, but acknowledging them doesn't give them any special responsibilities. There are, under no circumstances, to be any leaders in the Church.

Except for one circumstance. Not only is Frank's case for leaderless Christianity weak, but he admits in the book that he himself is an exception to the rule! When asked how he practically operates in meetings, Frank explains that he is essentially an apostle who doesn't participate in meetings the way everyone else should, but hops around from meeting to meeting and provides much needed oversight and leadership. He is the exception. That's convenient, isn't it?

Frank fails to see the connection between leadership in the Christian Church and the Old Testament, where we find leaders who function as leaders within the people of God, and see promises that God will raise up leaders to feed His flock with knowledge and understanding (Jer. 3:15). It is in fulfillment of these promises that Christ gave to the Church pastors and teachers with the command to "feed My sheep". Frank misses this connection completely. He ironically fails to understand the organic nature of leadership in human affairs.

One other thing I will note about the book. As serious as the content of this book is, the entire tone of the meeting is flippant, cheeky, and glib--not the kind of atmosphere befitting the revolutionary subject matter it claims to be. If you're going to come to the Christian Church and tell her that everyone has been doing it wrong for the last 2000 years, you'd at least think to be sober about it.
Posted by Eli at 2:12 PM

Eli,
Here is my comment to your critique of the writing from Viola. I don't find his ideas implausible. In fact I think it to be far more what God is looking to do in his church than anything I have personally witnessed. As a believer for more than 40 years I have witnessed the human mangling, and hierarchical style of the organized church and believe it to be lacking.

There are those (like yourself) who would never see this kind of body activity Viola advocates as legitimate. I believe that is because you are already convinced of another way. You are entitled to that perspective. However, I refuse to accept your premises.

You provided no more valid rebuttal than I have just done. You don't like his message and ideas concerning leadership so you rail against it as someone who seems to be offended by the very Idea of it. Well the man-centered approach I have experienced for close to 1/2 a century is from my vantage point, and others I know ineffective in bringing many sons to maturity. It has done nothing more than foster dependence. This is not what Jesus was after. If you want to discuss it further from a biblical standpoint I would be happy to.