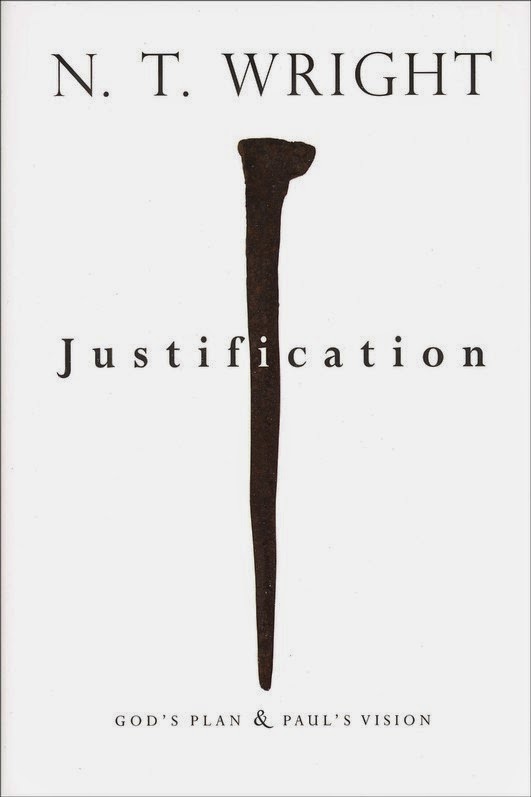 N.T. Wright is a prolific author and his popularity continues to grow. His appeal is obvious when one reads any book of his, and "Justification" is no exception, for in this book, as well as his others, Wright has a powerful point. He emphasizes the need to connect the gospel with the larger story of the Bible, and points to the general lack in Christian circles of doing just this. To this concern we should all respond with a hearty amen. It is a critical question: How does the gospel of Jesus Christ fit with the promise God gave to Abraham and the larger story of the Bible? I truly applaud Wright's concern for this question. But when it comes to answering the question himself, Wright miserably fails. His handling of the Scriptures does justice to neither the gospel nor the larger story, leaving instead a confused, exegetical mess. Nor does Wright inform his readers about the excellent answers that have already been given by Christians to this question in the past. After reading Wright, if a person didn't know any better he would think that no one had ever entertained the question before Wright came along. Thus in "Justification", Wright fails to answer the question and fails to point us in the direction of answers.

The main problem is that Wright takes a single point that tends to be lacking in traditional Protestantism and emphasizes it beyond its due, reducing just about everything into what he thinks the connecting theme of the Bible is. He argues that the Reformers were wrong in their teaching on the gospel. The gospel, for Wright, is essentially nothing more than a program of racial integration. This program is supposed to be the connecting link of the Bible. Just about every possible text regarding the gospel of Christ is reduced to this program. The gospel, for Wright, is not about being saved from your sins through the death and resurrection of Christ; it's about the breakdown of Jew/Gentile distinctions. He is reactionary and, like all reactionary theology, goes too far with his emphasis. He grabs onto one true aspect of the gospel and makes that aspect everything, excluding the very gospel of Christ itself. Wright unfairly criticizes the Reformers and speaks too harshly about them throughout the whole book. The issue, however, is more complex than Wright says it is. The Reformers in fact discovered and understood the gospel (the most important thing of all, and woe to us if we lose it!): the gift of righteousness by faith alone in Jesus Christ which saves us from the coming wrath of God. For this they are to be honored, even if they were not as perceptive in their day to connect this truth with the bigger story of the Bible. However, the answer is not to throw away the true doctrine of imputed righteousness which the Reformers discovered, as Wright has done, but to better understand how that doctrine fits with the larger story (as it most certainly does). To throw away the Evangelical gospel would be the proverbial 'throwing away the baby with the bathwater'.

The thing that disturbed me the most about "Justification" is that Wright sucks the moral content out of Pauline theology. His definition of righteousness has nothing to do with man's moral status, but has solely to do with God's status, not as a moral God, but as a covenant-keeper, and concerning man, righteousness is nothing more than a statement of man's membership status in the covenant. Thus everything is reduced to non-moral covenantal terms. It almost seems like Wright speaks of morality with contempt. It would appear that the foundational teaching by Jesus on righteousness--the Sermon on the Mount--is non-existent for Wright. Had he taken it into consideration, he would have understood that righteousness is the determining factor as to whether a man enters the kingdom of heaven or not, and that it is decisively moral. Wright's interpretation of Galatians utterly ignores the connection between Galatians 2:16 and 3:10, as well as the Deuteronimic context of Galatians 3:10, which is all about morality. Wright is also inconsistent throughout the book, denying one thing only to affirm it later. For example, he argues repeatedly that Abraham is not an example nor illustration of justification, as the Reformers say he is, but then on p. 209 he affirms that he is.

Wright's exegesis is not carefully executed verse by verse, but is very generally pieced together section by section; it sweeps, skips and leaps, grabbing onto words and thoughts and weaving them into the narrative that he has decided is there. His interpretations will not leave you with a clearer grasp of the epistles, but will leave you with a confused, non-intuitive picture.

In the book Wright has four main re-definitions that he argues for: 1) "the righteousness of God" should be defined as God's faithfulness to His covenant, 2) "justification" should be defined as our identification as covenant members, 3) "the works of the law" should be defined as Jewish ceremonies which mark you as God's people, not moral works. These ceremonial works are opposed with faith in Christ as the badge of membership, and 4) the Spirit's work in the lives of God's people should be understood as the cause of final justification. Wright fails to show how these ideas are connected in any real and organic way. Such definitions, even if there are elements of truth to them, fail to present the full Biblical truth contained in those words, and destroy the moral focus of Scripture, the true doctrine of justification, assurance of salvation, and makes the Spirit of God a magical force with no connection to the inspiration of love stemming from the truth of the gospel.

I do not recommend Wright's "Justification" at all for those who are wanting to understand the doctrine of justification as it is taught in the Bible. It is perhaps only useful for understanding the New Perspective debate. The best book by far on the theology of the death of Christ in the New Testament is James Denney's "The Death of Christ". Also indispensable is Denney's "The Christian Doctrine of Reconciliation." For understanding the connection between the gospel and the Abrahamic covenant, read "Israel in the Plan of God" by David Baron, "The Divine Unity of Scripture" by Adolph Saphir, as well as Saphir's "Christ and Israel". These men will explain clearly and beautifully how only the Reformed discovery of justification through faith fits exactly with God's promises to the great patriarch Abraham.
Posted by Eli at 1:36 PM

Your review is a very inaccurate representation of what Wright has written in this book. You have misunderstood pretty much everything. I would respectfully suggest you try reading it again with a more open mind and an open Bible alongside you.

I agree with You Eli. N.T. Wright has another view on justification. Dr. Michael Eaton has written an large section on it in his book 'No condemnation: a theology of assurance'