Book Review: "The Kingdom of God" by John Bright 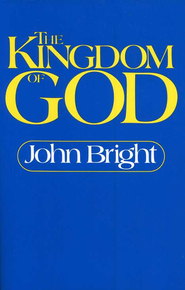 John Bright's writing style is interesting and animated, which makes this book an easy page turner. Most of the book is an excellent analysis of Israel's history and the progress of Israel's understanding of the kingdom of God. I found this very helpful and well thought through. For this alone it is well worth the read.

However, the book disappoints in the last few chapters when Bright begins discussing the kingdom of God in New Testament. It is not that I don't agree with him in his conclusion that the kingdom of God is "already" and "not yet": his discussion of the tension between the kingdom already come and the kingdom still coming is undoubtedly excellent. But it is that Bright wholly sidesteps the issue of the land of Israel, not even mentioning it, as if it was a non-issue. This is remarkable because the entire Old Testament is building up this theme, only for Bright it falls flat in the New Testament. This is a colossal oversight (or better, error) made by many Christian scholars. We fail to see the significance of the land of Israel, as well as the kingly motif of the son of David, even though the land and the coming king are writ large all over the Scriptures!

In the latter part of the book Bright also repeatedly uses the non-Biblical and almost blasphemous (though certainly unintentional) phrase "new Israel", even though the Bible never once uses this phrase and never conceives the Church of Christ as the "new Israel". In fact Bright contradicts himself, for in the course of the book he explains how the Church saw itself as the righteous remnant within Israel (a point well made). Here was an unfortunate and sloppy oversight.

The problems with Bright's book are similar to the problems with Graeme Goldsworthy's book "Gospel and Kingdom", written on the same subject. Both authors do a masterful job of analyzing the Old Testament and tracing the concept of the kingdom of God in Israel's thinking. Their books are pure gold on this point. But then when they both get to the New Testament everything changes and they absolutely fail to connect the dynamic theme, which they had so wonderfully been following in the Old Testament, with the New Testament. Everything falls flat; concepts are redefined; and we are left with an entirely different conception in the New Testament than what we were getting so excited about in the Old Testament. In my opinion this is due to a sloppy Christian systematic way of thinking that gets forced upon the New Testament. This way of thinking doesn't know how to connect with Israel's historical hope. The result is a very Gentilish and non-Biblical idea of the kingdom which is foreign to the Biblical authors themselves. What amazes me most of all is how Christian scholars can make this jarring maneuver without hardly noticing nor even making mention of the land of Israel and the son of David, those enormous Old Testament themes they discard.

Nonetheless the book is full of priceless gems and insights and is greatly worth reading. I simply hope to help future readings of this book (and other books on the same subject) to notice the glaring omissions made by many Christian scholars, and to take special care in seeing the continuity between both Testaments. The lack that exists in Christian scholarship on this point needs serious remedy.
Posted by Eli at 5:40 PM

I think the reason that John Bright and Graemes Goldworthy did not see the NT supporting the idea that the land of Israel had a big part to play in the Kingdom of God comes from their reading of Galatians 4:21-31--earthly Jerusalem corresponding to Mount Sinai and slavery to sin; and Hebrews 12:18-24 contrasting Mount Sinai and heavenly Jerusalem as opposed to the earthly city. Hebrews 11:10-16 also speaks of Abraham seeking a heavenly country rather than an earthly one. But these scholars still could have written about this if that was indeed their perspective.