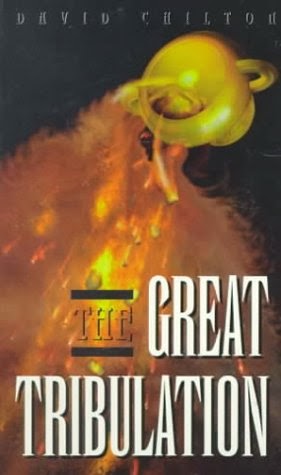 David Chilton begins the book by seeking to correct what he sees as a faulty interpretation of the Olivet Discourse (Jesus's eschatological teaching to his disciples). Chilton writes as if he were but pointing out the obvious, yet by writing so he merely points out how little he understands the Olivet Discourse as well as the viewpoint that he so flippantly criticizes. Chilton repeatedly pigeonholes those who don't see things his way as those who don't understand the Old Testament, but it is painfully obvious that the one who in fact fails to understand the Old Testament is Chilton himself, for had he understood it he could never have written a book as ridiculous as this one. Had he understood the Jewish context and mindset of Jesus and his disciples he could never have imagined his incredible idea that the disciples equated the "the end of the age" with the destruction of Jerusalem. This would be the last thing any Jew in the first century would think. According to the Old Testament the coming of the Messiah and the dawning of the new age meant salvation for Jerusalem, the opposite of what Chilton imagines the disciples of Jesus believed. By saying this Chilton reveals how little he understands the Old Testament hope and how little he appreciates what Jerusalem means to God and the Jews.

Furthermore, Chilton fails to see the strength of the opposing view regarding the Olivet Discourse. He fails to see that there are better ways of understanding Jesus' words that are more reasonable than the far-fetched and outlandish interpretations that he sets forth. Chilton is left straining and bending the texts to fit them within the historical setting of the 1st century. His explanations are simplistic and not well thought through. A comparison of his view side by side with the opposing view would be instructive, but the reader must not expect to find such a comparison presented in this book.

In essence Chilton has flippantly disregarded the main message of the Old Testament regarding Israel, carelessly handled the clear teachings of the Lord Jesus and his apostles in the New Testament, and staked the weight of his argument upon a wholesale reinterpretation of the Book of Revelation. It is unwise to put all of your weight upon an apocalyptic book like Revelation, the symbolism of which has baffled commentators for millennia. A far wiser policy would be to interpret the less clear passages in the Bible by the clear passages in the Bible, rather than the other way around as Chilton does. But it is precisely in the clear passages of the Bible that Chilton stumbles, and he must take refuge in the apocalyptic.

Nonetheless Chilton's interpretation of Revelation is as strained as his interpretation of the Olivet Discourse, as he attempts to make every jot and tittle of John's apocalypse a vitriolic imprecation against the nation of Israel. There are two things that can be said about Preterists like Chilton: 1) they don't believe Israel is significant anymore, and 2) they still hate them. Remarkably, Chilton argues that the early Christians prayed ardently for the destruction of Jerusalem and the nation of Israel. They got on their knees and begged God for this because only when Israel was gone would "the new age of the Church" and "the New World Order" begin, when the Church can finally assert its authority and dominate the world. This is in direct opposition to the prayer and longing of Paul the apostle for Israel in Romans 9:1-3, 10:1 and 11:1-36. This is also fanciful thinking which is evidently false, for the Church did not need to wait for the destruction of Israel to be the missionary Church that she is called to be by the Lord, nor has the destruction of Israel in 70 AD seen any marked change in the world for the Church. As the years have rolled on Chilton's imagined triumph has been shown to be but a dream. And what of the establishment of Israel again in 1948? Did the sovereign God - whom Chilton rightly declares is in control of every motion in heaven and on earth - make a mistake by reversing the once and for all supposed declaration in Israel's destruction of the "the age of the New Covenant"? Such views are at odds, not only with Scripture, but with plain common sense.

The tone of this book is shockingly hateful. It reminds one of Jesus' statement to the sons of thunder who wanted to call down fire and brimstone upon those cities that rejected Christ: "You know not what manner of spirit you are of." (Luke 9:55) Chilton believes the Church has the power and responsibility, through liturgy and prayer, to cause God to destroy evildoers and evil nations. He urges passionately that the Church should be doing just that: praying imprecatory prayers for the destruction of the ungodly. The liturgical power he attributes to the Christian Church in order to curse and destroy reminds me of the Hindu spells Brahminical priests claim to have possession of and use to dispose of undesirables. According to Chilton, I wonder if the Church should be spreading the gospel of God's grace to sinners at all, or just praying for their destruction. The world might become a better place faster if we stopped trying to persuade unbelievers and just annihilated them (through prayer of course, for the glory of God). The message and tone of this book is just ugly.

David Chilton did the Body of Christ and the world a disservice by writing this book and his others that are like it. Perhaps the one redeeming thing that comes out of books like these is that it helps us sharpen our understanding and grasp more deeply what the true is in contrast to the false. False teaching has an interesting way of doing that.
Posted by Eli at 6:01 PM

Then why don't you publish your refuration of Chilton's writings? Point by point, rather than this little article hidden in a vast corner of the internet. I believe it can't be done. And of course, whatever you write will be confronted by men such as gary demar and gary north. This, of course, makes you tremble. Which should tell you to examine your own theology.