Socrates on the Existence and Goodness of the Divine 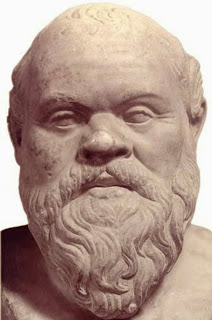 I came across this remarkable passage in Xenophon's Memorabilia, Book IV, Chapter 3, in which Xenophon records a dialogue he heard between Socrates and a young man named Euthydemus regarding the existence and goodness of the gods. It immediately made me think of Paul's saying in Acts 14:15-17,

"We preach unto you that you should turn from these vanities unto the living God, who made heaven, and earth, and the sea, and all things that are therein: who in times past suffered all nations to walk in their own ways. Nevertheless He left not Himself without a witness, in that He did good, and gave us rain from heaven, and fruitful seasons, filling our hearts with food and gladness."

“Tell me,” said he, “Euthydemus, has it ever occurred to you to consider how carefully the gods have provided for men everything that they require?”

“It has indeed never occurred to me,” replied he.

“You know at least,” proceeded Socrates, “that we stand in need, first of all, of light, with which the gods supply us.”

“Yes, by Jupiter,” answered Euthydemus, “for if we had no light, we should be, as to the use of our eyes, like the blind.”

“But, as we require rest, they afford us night, the most suitable season for repose.”

“That is assuredly,” said Euthydemus, “a subject for thankfulness.”

“Then because the sun, being luminous, shows us the hours of the day, and everything else, while the night, being dark, prevents us from making such distinctions in it, have they not caused the stars to shine in the night, which show us the night-watches, and under the direction of which we perform many things that we require?”

“The moon, too, makes plain to us not only the divisions of the night, but also of the month.”

“But that, since we require food, they should raise it for us from the earth, and appoint suitable seasons for the purpose, which prepare for us, in abundance and every variety, not only things which we need, but also things from which we derive pleasure, (what do you think of such gifts?)”

“They certainly indicate love for man.”

“And that they should supply us with water, an element of such value to us, that it causes to spring up, and unites with the earth and the seasons in bringing to maturity, everything useful for us, and assists also to nourish ourselves, and, being mixed with all our food, renders it easier of digestion, more serviceable, and more pleasant; and that, as we require water in great quantities, they should supply us with it in such profusion, (what do you think of such a gift?)”

“That they should also give us fire, a protection against cold and darkness, an auxiliary in every art and in everything that men prepare for their use, (for, in a word, men produce nothing of any consequence among the various things necessary to life, without the aid of fire,) (what do you think of such a gift?)”

“That, likewise,” said he, “excels in philanthropy.”

“That they should diffuse the air also around us everywhere in such abundance, as not only to preserve and support life, but to enable us to cross the seas by means of it, and to get provisions by sailing hither and thither among foreign lands, is not this a boon inexpressibly valuable?”

“It is indeed inexpressibly so,” replied he.

“That the sun, too, when it turns towards us in the winter, should approach to mature some things, and to dry up others whose season (for ripening) has passed away; and that, having effected these objects, he should not come nearer to us, but turn back, as if taking care lest he should hurt us by giving us more heat than is necessary; and that when again, in his departure, he arrives at the point at which it becomes evident that, if he were to go beyond it, we should be frozen by the cold, he should again turn towards us, and approach us, and revolve in that precise part of the heaven in which he may be of most advantage to us, what do you think of things so regulated?”

“By Jupiter,” replied Euthydemus, “they appear to be appointed solely for the sake of man.”

“Again, that the sun, because it is certain that we could not endure such heat or cold if it should come upon us suddenly, should approach us so gradually, and retire from us so gradually, that we are brought imperceptibly to the greatest extremes of both, (what do you think of that appointment?)”

“I am reflecting, indeed,” said Euthydemus, “whether the gods can have any other business than to take care of man; only this thought embarrasses me, that other animals partake in these benefits.”

“But is not this also evident,” said Socrates, “that these animals are produced and nourished for the sake of man? For what other animal derives so many benefits from goats, sheep, horses, oxen, asses, and other such creatures, as man? To me it appears that he gains more advantages from them than from the fruits of the earth; at least he is fed and enriched not less from the one than from the other; and a great portion of mankind do not use the productions of the earth for food, but live by herds of cattle, supported by their milk, and cheese, and flesh; and all men tame and train the useful sort of animals, and use them as help for war and other purposes.”

“I agree with what you say on that point,” said Euthydemus, “for I see some animals much stronger than we, rendered so subservient to men that they use them for whatever they please.”

“But that, since there are numberless beautiful and useful objects in the world, greatly differing from one another, the gods should have bestowed on men senses adapted to each of them, by means of which we enjoy every advantage from them; that they should have implanted understanding in us, by means of which we reason about what we perceive by the senses, and, assisted by the memory, learn how far everything is beneficial, and contrive many plans, by which we enjoy good and avoid evil; and that they should have given us the faculty of speech, by means of which by information we impart to one another, whatever is good, and participate in it, enact laws, and enjoy constitutional government, what think you of such blessings?”

“The gods certainly appear, Socrates, to exercise the greatest care for man in every way.”

“And that, since we are unable to foresee what is for our advantage with regard to the future, they should assist us in that respect, communicating what will happen to those who inquire of them by divination, and instructing them how their actions may be most for their benefit, (what thoughts does that produce in you?)”

“The gods seem to show you, Socrates,” rejoined he, “more favor than other men, since they indicate to you, without being asked, what you ought to do, and what not to do.”

“And that I speak the truth, you yourself also well know, if you do not expect to see the bodily forms of the gods, but will be content, as you behold their works, to worship and honor them. Reflect, too, that the gods themselves give us this intimation; for the other deities that give us blessings, do not bestow any of them by coming manifestly before our sight; and he that orders and holds together the whole universe, in which are all things beautiful and good, and who preserves it, for us who enjoy it, always unimpaired, undisordered, and undecaying, obeying his will swifter than thought and without irregularity, is himself manifested (only) in the performance of his mighty works, but is invisible to us while he regulates them. Consider also that the sun, which appears manifest to all, does not allow men to contemplate him too curiously, but, if any one tries to gaze on him steadfastly, deprives him of his sight. The instruments of the deities you will likewise find imperceptible; for the thunderbolt, for instance, though it is plain that it is sent from above, and works its will with everything with which it comes in contact, is yet never seen either approaching, or striking, or retreating; the winds, too, are themselves invisible, though their effects are evident to us, and we perceive their course. The soul of man, moreover, which partakes of the divine nature if anything else in man does, rules, it is evident, within us, but is itself unseen. Meditating on these facts, therefore, it behoves you not to despise the unseen gods, but, estimating their power from what is done by them, to reverence what is divine.”
Posted by Eli at 7:13 PM

Wonderful! I have long wondered if the inner "voice" to which Socrates often referred was indeed the voice of the God of Abraham, Isaac, and Jacob. Even if not, it is amazing how much Socrates was able to understand of the Hebrew God by reason alone. Thanks for your post!