Book Review: "The Art of Manfishing" by Thomas Boston 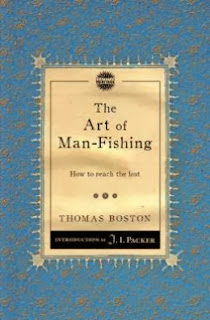 This is an impressive little volume considering the fact that Thomas Boston wrote it when he was only 22 years old. Also, considering the fact the entire book is written to himself, addressed to his own "soul", Boston's "The Art of Manfishing" is a fascinating window into the mind and inner machinations of a young Puritan.

Since "The Art of Manfishing" is a Puritan book, it is both deeply helpful and deeply flawed. The Puritans are deeply helpful in that their sobriety about life is contagious. They took life seriously and they took God seriously. They kept the reality of death and judgment to come in view in all that they wrote and did. We all can have more of this. On the other hand, the Puritans were deeply flawed in that they understood the gospel in a kind of schizophrenic way: on the one hand they believed in the gift of righteousness that is by faith alone in Jesus Christ alone, but on the other hand they also believed that God would be angry with them and punish them if they sinned or disobeyed Him. Thus their joy in the gospel was practically nullified, and many Puritans lived discouraged lives, hoping in the grace of God yet lamenting the feeling that God was constantly displeased with them (see the case of John Bunyan in this regard).

The most valuable issue Boston raises in the book concerns Jesus' saying: "Follow me, and I will make you fishers of men." Boston asks the question, "How does Christ make men fishers of men?" Is it that He only makes them fishers by office, regardless of their success, or does He also make them successful fishermen? In other words, according to this saying, when a man follows Christ, does Christ promise success at fishing, or only that the person will become a fisher? This is an excellent question, worth asking. Boston answers affirmatively, that Christ will make a man both a fisher by office and also successful, provided that the man follows Christ and imitates Christ's example. Boston doesn't set out to prove his point in the book, but only proceeds to lay out the example of Christ for us to follow. Therefore the question remains an excellent question to explore with others.

Boston challenges preachers of the gospel to study the life of Christ, to examine why they are preaching (for what end and for whose glory?), and to see their need for following Christ's example in manfishing.

The example of Christ is laid out by Boston in eight points (the following is in my own words):

These points are all very true and good. I especially thought his first point was profound, though I feel like he himself did not grasp the profundity of it. Boston made much of being ordained by the Church to preach, but didn't talk as much about the sense of being called by God to preach. According to the Scriptures the Church is commanded by Christ to preach the gospel into all the world. Stress does not need to be laid upon personal unique callings, but upon the universal call that we, the Body, have already received. Since Christ preached with the knowledge that He was sent, and with the awareness that He was not preaching of His own accord, so the Church must also preach with the crucial awareness that we are not preaching of our own accord and initiative, but that we, like Christ, are sent as well. Good preaching is preaching with this sense, or awareness, of calling.

Another good point Boston made was the need to care about souls and to be emotionally affected by their case. He highlights how Jesus had compassion for souls and wept over their case, and how Jesus was grieved for souls because of the hardness of their hearts. Christ was not careless and emotionally removed. He knew the value of souls. How can a fisherman be successful if he doesn't see the value of fish? He will not make a very good effort, and use all his skill in order to catch fish if he doesn't see the value of them. Boston exhorts us to have the mind of Christ in this regard.

Probably the main point Boston makes in the book is the need for prayer. One will not be successful in manfishing if one is not praying. Christ prayed. Prayer is so important to Boston, that little else is. We need to beseech God to use our preaching, to break hard hearts, to drive the fish into the net, to keep the devil away, to keep us healthy and capable, to give us clarity and power in preaching, etc. This can only be good advice. While we are prone to wonder what good prayer can do, and we wonder why God even wants us to pray since He already knows everything before we ask, nevertheless we have the example of Jesus Christ before us. If the Son of God prayed, it doesn't really matter what our doubts may be. We, too, need to pray.

"The Art of Manfishing" is a good book. I wouldn't say that it is a great book. It contains much of what you will find in any book on evangelism. Boston's Puritanism gets in the way too much of the time, and as I said, this has a good side and a bad side. Nevertheless, I appreciate our brother's passion for souls and his desire to follow Christ's example. His sobriety about life is so important for our age to understand. I pray that we may all have the same passion for souls in our hearts, and the same desire to follow the One who makes us fishers of men.
Posted by Eli at 4:38 PM