Book Review: "The Knowledge of the Holy" by A.W. Tozer 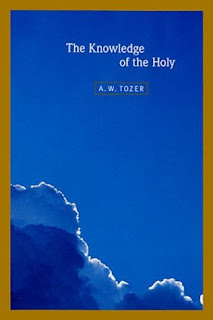 A.W. Tozer (1897-1963) was an prominent author and pastor in the 20th century, who, along with other men like Leonard Ravenhill, were critical of the Church's apathy and compromise and called her to examine the reality of her faith. His influence has outlived his life. Whether that influence is a good influence or a bad influence is debatable. I believe it was largely bad.

Unlike Ravenhill, Tozer proves himself in this book to be a serious intellectual. He is well read and displays a sharp mind. However, men who have sharp minds and are well read are not in any way immune to error, and I believe Tozer spoils an otherwise excellent book by his errors.

The Knowledge of the Holy is Tozer's call for the Church in the 20th century to re-acquaint herself with God and return to the knowledge of the one true God. He understood that what we think about God will effect everything else that we do. He saw that in his day people were perverting the knowledge of God, seeing God as one like themselves who simply desires to help humanity accomplish their own desires. He laments the lack of reverence and wonder of the Almighty God. He wrote the book to correct this.

The book covers the usual attributes of God that one would find in a standard theology textbook. The metaphysical attributes are covered in the first half (omniscience, eternality, infinitude, immutability, etc.) and the moral attributes in the second half (faithfulness, goodness, grace, love, etc.). One error Tozer introduces early in the book, and then afterward repeatedly contradicts himself, is that he states that faith is not based upon evidence. This is by itself false, for faith is, by its dictionary and Biblical definition, a "conviction", and a conviction is always based upon evidence. Tozer then contradicts himself throughout the book by providing evidence for why we should believe such and such attributes of God. However, if you can see past this common error that many make, the book can still be a blessing.

I think Tozer does just as good a job of discussing the metaphysical attributes of God as any introductory theology textbook would do, and with this bonus: Tozer is not dry. Theology should never be dry, and Tozer shows us that. I found myself greatly blessed as I meditated with Tozer on the majesty and the magnitude of God.

The second half of the book, however, which deals with God's moral attributes, is the weakest half. The average evangelical pastor could (hopefully) write just as good a discussion of the grace and love of God as Tozer did; and perhaps even better than he did. This is because Tozer's understanding of the gospel was sadly not very clear. Tozer, along with Ravenhill and many other criticizers of the Church, did not understand the central doctrine of righteousness through faith apart from works as well as he probably thought he did. You can see this throughout the book, because whenever Tozer talks about salvation it is far more focused on man than on Christ; on our cross rather than Christ's cross; what we need to do and how we need to repent rather than what Christ did for us and how we simply are to rest in His finished work through faith. Tozer is either ambiguous on conversion or worse. This is why his discussion of the moral attributes of God was not very good, leaving many important things to be desired.

The most ironic thing about this is that the moral attributes of God are the essential attributes that show us who God really is. When God showed Moses His glory, He did not pass by Him and proclaim "The Lord, the Lord God, omnipotent, omniscient, omnipresent, eternal, infinite, etc." although all these things are true and wondrous about God. But the Lord proclaimed "The Lord, the Lord God, merciful and gracious, longsuffering and abundant in goodness and truth, etc." (Ex. 34:6) Jeremiah the prophet wrote that through the New Covenant all Israel will know God, from the least of them to the greatest, because God will forgive their sins and remember their iniquities no more (Jer. 31:34). The apostle John wrote that it is Jesus Christ who came "full of grace and truth" that alone reveals to us the Father (John 1:14-18). He who does not know God as the loving God of saving grace in Christ, although he know all the metaphysical qualities of God, does not truly know God. It is the grace and love of God revealed in Christ that is the supreme revelation, that gives us the knowledge of the holy, without which we do not know God. Yes, we need to fall on our faces in reverent wonder that God is the eternal and self-existent God. I do not in any way intend to suggest otherwise. But until we also stand up and rejoice in the God who gave His blood to wash away our sins by His pure, undeserved, free, and unconditional grace, we do not yet know and worship God.

It is too bad that this is the case with Tozer's The Knowledge of the Holy, because I would otherwise have highly recommended it as an exciting and lively introduction to the attributes of God.
Posted by Eli at 6:16 PM

Eli, dear brother, this is Paul West. I just wanted you to know that I am blessed by this review and regret that you and I have crossed theological swords in the past on SermonIndex. I see now that you were right all along, referring to grace, and I was wrong. God has opened my eyes in these last few years, and I am so grateful to Him. Ravenhill and Tozer's convictions have impacted me deeply in my early years as a believer, but they have led me to personal ruin rather than rest. Young believers really need to guard themselves with discretion and godly wisdom in what they allow into their minds through preachers and books. Just because there is zeal and passion, it doesn't always equate to truth. If a man is unclear on the simplicity of the gospel and the eternal grace of the blood of Christ, it matters not how eloquently he waxes on obedience, holiness, sanctification and repentance. Bless you dear brother! I can be reached at jalapablo@gmail.com.

Eli, I hear and appreciate your review of Tozer's Knowledge of the Holy. I have gone back to this book many times for many years, largely for its devotional treatment of God and his nature.

If you come at this book with a solid biblical understanding of God's sovereignty in Salvation, and of man's yeilding to the indwelling Spirit in sanctification, as He enables us to kill indwelling sin, then Tozer's errors can be seen, and to some degree tolerated. Balancing Tozer's treatment with many other good books on the attributes of God will do the same.

As a committed Reformed Calvinist Covenantalist (!), I have commended this book to many people BECAUSE of the devotional style, but doing as you have said, "Don't put the man on the pedastal and worship him!"

If you're honest as a practicing Calvinist, you will not find anything written by a non-Calvinist as worthy of praise.
It may be surprising to you that the vast majority of Christians today do not share your doctrinal commitments. They accept the words of the Bible for what they say about God's nature, not what Calvin or Augustine say they say.
Anyone who believes that humans cannot seek for God will not accept someone like Tozer's admonitions to human enterprise to seek to understand the majesty of God.
The problem is that God's majesty is not revealed in Calvin's Sovereignty. It is revealed in His persistent willingness to accept those who answer his call to His mercy, and the incomparable indwelling of His Spirit that results.
Having said all that, you are on the right track in identifying God's moral attributes as those who distinguish Him as uniquely divine. However, how the product of those attributes are dispensed to His humanity is not a matter of His random choice. It is simply a matter of His beneficent mercy extended to all, to which some will say "Yes, Lord!"