Catholics and Protestants: Can There Be Unity? (Part 2) 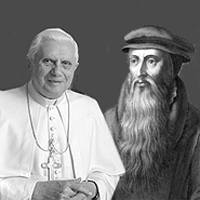 Thanks, H-----, for the thoughtful response. I enjoyed Kreeft's article on justification by faith, but I disagreed with him and feel that such a stance sweeps the real issues under the rug instead of dealing with them. I don't believe the difference is merely a matter of terminology or emphasis, but a fundamental difference in thinking, though the common terminology adds to the confusion and makes it appear that there is agreement when there isn't (the same can be said about Mormonism). The clear difference in thinking can be seen here, for example, in the Council of Trent:

"In opposition also to the subtle wits of certain men, who, by pleasing speeches and good words, seduce the hearts of the innocent, it is to be maintained, that the received grace of Justification is lost, not only by infidelity whereby even faith itself is lost, but also by any other mortal sin whatever, though faith be not lost; thus defending the doctrine of the divine law, which excludes from the kingdom of God not only the unbelieving, but the faithful also (who are) fornicators, adulterers, effeminate, liers with mankind, thieves, covetous, drunkards, railers, extortioners, and all others who commit deadly sins; from which, with the help of divine grace, they can refrain, and on account of which they are separated from the grace of Christ." (Chapter XV)

Here a few things are said: 1) justification by faith without works (Rom. 4:5-6) is false, for even if a person has faith, but sins, they are lost. 2) Divine law is incumbent upon a person for justification, and their sins will keep them out of the Kingdom of God, even if they have faith in Christ. 3) Sins separate them from the grace of God.

Such a belief of justification really eclipses the glory of the love and grace of God, because it really doesn't matter that Jesus loves you and gave Himself for you... if you commit a mortal sin you are lost. So the mind will never be resting and rejoicing in the love and grace of God, but will always be concerned about obedience. If a person is doing well then can be glad. If they are not doing well they can't be glad. But the true gospel frees us to be glad in Jesus Christ at all times, in no way dependent upon our performance (Phil. 3:3, 4:4). This is so freeing!

Have you ever wondered what the emphasis the New Testament places upon freedom is all about? "If the Son therefore shall make you free, ye shall be free indeed." (John 8:36) "Now the Lord is that Spirit: and where the Spirit of the Lord is, there is liberty." (2 Cor. 3:17) "Stand fast therefore in the liberty wherewith Christ hath made us free, and be not entangled again with the yoke of bondage." (Gal. 5:1), etc. Is it freedom from governmental tyranny? No, of course not. Is it freedom from sinning? Some would think so, but there is no sense of this whatsoever in the text, and if it were true there would be no Christians, for who has been freed from sinning? What is it then? It is this: the glorious freedom of being free from all performance obligations so that our standing and relationship with God is determined no longer by our own works and obedience, but by the righteous grace of Jesus Christ alone. It's the feeling you get when you don't have to take an exam, on a Divine scale! That's true freedom!

Another obvious difference between Catholics and Protestants is seen in the statement made by the Council of Trent about "divine law". The Scripture states that Christians are not under the law any more, that is, that as Christians we have no obligations keep the law for whatever reason. We are dead to it in every respect - to its injunctions and punishments (Rom. 6:14, 7:1-6). If what the Council of Trent says is true, and we are still indeed under the law, then we are all also under the curse of the law, "For as many as are of the works of the law are under the curse: for it is written, Cursed is every one that continueth not in all things which are written in the book of the law to do them." (Gal. 3:10) If the law determines our justification before God, then no one shall be justified, "for by the works of the law shall no flesh be justified." (Gal. 2:16b) This was the great contention during the Reformation.

To say that Luther, the Reformers and the Roman Catholics misunderstood is not right. They understood all too well. Luther was not ignorant of Catholic theology but was a doctor of theology at the University of Wittenberg. If it were merely a matter of semantics, why were the Reformers condemned as heretics, and the pious William Tyndale, for example, burned at the stake for believing that a man was justified by faith without the works of the law (one of two charges that led him to the flames)? I'm just raising the question because of what it reveals.

I really appreciated Kreeft's explanation of faith, hope and love as a plant's root, stem and fruit (an excellent analogy). But I believe the real misunderstanding and the issue that never seems to be considered is the matter of the object of faith: what a person is believing. We use the word "faith" like there is only one kind, but a Muslim's faith is quite different than a Christian's. A Muslim's faith does not produce hope and love simply because it is "faith". The Bible's teaching on faith and works requires first a correct faith, for faith is not this generic thing, but a conviction about something that is not seen (Heb. 11:1). But what is that conviction? What is that thing that is not seen? It is the gospel of Jesus Christ as it is in truth. It is that God came into the world to save sinners as sinners by grace through faith. "Not by works of righteousness which we have done, but according to his mercy he saved us." (Titus 3:5) If this gospel is believed then the fruit of love is born. I mentioned this in my last email. When a person believes the good news that he is justified and saved by pure unmerited favor because of the loving sacrifice of God's Son, and that there is no works required for him to do whatsoever, that God freely forgives Him of all his sin because God desires to and has enabled Himself to do so, and not because of the man's performance... when this gospel is believed it does something to you... it affects you, it melts you, it changes you by the wonder of such unconditional, relentless, incomprehensible love. But if the gospel is eclipsed by conditions other than faith, then we lose the only power of fruit bearing and find ourselves desperate to produce fruit which cannot be born by a generic "faith", and the impossible rat race of making ourselves acceptable to God begins. Christianity is all about assurance and security, not striving to arrive. Good fruit is born from a tree that is planted safely by the rivers of living waters, the rivers of God's grace and love in Christ Jesus.

Much more to be said. Looking forward to our continued dialogue.
Your friend,
-Eli
Posted by Eli at 5:29 PM