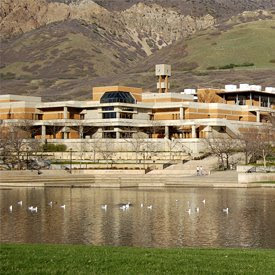 It's time for another update, and I hope this finds you all well, strong and in Lord, and rejoicing in His grace.

April was a busy month. With the weather shifting more and more from winter into spring, there's also been the opportunity to head onto the campus scene, taking the gospel to the student population once again. Brad and I spent three days at Weber State University in Ogden earlier in the month, handing out literature and open air preaching.

Though the weather was suppose to be nice, it seemed to vary dramatically each day. Valley weather, and being at such a high elevation (nearly 5000 ft!), tends to do that. So the day might start sunny and quickly turn to snow... the first two days were like this, but we preached and handed out tracts regardless, engaging in many fruitful conversations.

The first day, no sooner had I begun preaching, a student who had listened to me preach last year chimed in and we had excellent dialogue concerning the difference between Joseph Smith's 'gospel' and the gospel of the Apostle Paul in the New Testament. I spoke to him about the law, how God has shut up the whole world under sin so that they may be justified by faith in Christ, while other people listened in. Ryan, who was LDS, afterwards exclaimed in shock, "Are you saying that all I have to do is just humble myself, go down low, admit I'm a sinner who has no righteousness, and call upon God to for mercy to save me!?" It was amazing to see him 'get it', even though he didn't receive it that day; many Mormons do not even get that far! He was intrigued by the thought that God justified those who had no righteousness of their own, and came back the third day to talk more about it. The preaching of the cross is indeed foolishness to all other perishing religions, which teach that you must work to achieve acceptance with God.

On day two I noticed a fellow sitting down on the bench listening to my message, and afterwards he came over to talk with me. He said he was searching for the meaning of life but was struggling with faith. We talked for quite a while, and I was able to share with him that he was spiritually dead and needed to be born again, which was the work of the Spirit alone. Before he had to go, he said, "I want to hear from God, but it never seems like He speaks to me." I replied, "You're talking with me now, how do you know God didn't arrange this conversation?" Very thoughtfully, he said, "You could very well be right... I was actually halfway to my class, and I don't know why, but I felt compelled to turn around and come back and listen to you."

There were others Brad and I spoke with too. One young lady who had heard us last fall saw us again and expressed her dislike of us preaching the way we do, but stayed around to listen, and the last day she changed her attitude, was very friendly, and contributed to the discussions. Another young man, a Roman Catholic, was challenged to study the Scriptures and not just believe what the church told him to believe. He admitted to having believed without question, and decided he would look at the Scriptures for himself.

Brad also was able to hand out plenty of free books, and had a steady queue of conversations with students. Several Christians spoke with Brad and were really encouraged to get serious about their faith. We also were delighted to link up with two Christian-workers from Ogden who spend most of the day with us on Thursday. It was encouraging for us to see brothers coming together with one mind, and they were glad to see how the gospel was being spread on campus through literature and preaching.

"And God is able to make all grace abound toward you; that ye, always having all sufficiency in all things, may abound to every good work: Being enriched in every thing to all bountifulness, which causeth through us thanksgiving to God." (2 Corinthians 9:8,11)

How easy it is for God to do HIS work! He is the God of all grace, and through Him nothing shall be impossible.

Thank you all so much for your prayers. Please continue to pray for me, that Christ to would fulfill His purposes in my life, that I would grow up into Him in all things, that I would be diligent to hear His voice, respond by faith, and follow Him into every battle.

The grace of the Lord Jesus Christ be with you all.
Your brother in Christ,
-Eli
Posted by Eli at 7:18 PM

I've tried to call a couple times in the last few weeks...you were in Idaho last time I called...will be in touch soon...preach on bro, preach on.