My Lunch with Six Mormon Missionaries 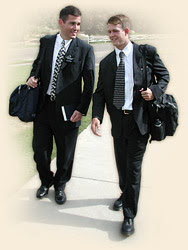 A good read, Eli. I have to wonder what the missionaries' take of the discussion was, though.

Here is the LDS response to the faith vs. works debate...

praise God! I am going to print this off and read at work.

QUOTE: "You will never repent of your sins, because the Bible says you cannot." Eli

QUOTE: "you can't repent of your sins" Eli

Can you explain this? Unless a person repents, they will perish. But your saying that nobody can repent?? I don't get it. Why would God make repentance a condition of salvation if repentance was impossible? Certainly God would give us the power to repent if He wants us to repent.

God forgives us by His grace and mercy through the atonement if we repent of our sins and trust in Christ.

Hi Jesse, good to hear from you.

The reason why you 'don't get it' is because you have a low view of the law and an incorrect view of repentance. True Christian repentance is to repent of SELF. You are misunderstanding repentance to be about the symptoms, not about the problem. Sins are the symptoms of the greater problem of self. You must repent of SELF to be saved.

Ironically, if you seek to repent of the symptoms but not of Self, you will find Self growing larger, stronger and more proud. By trying to become better, you become worse. What we need is a total personal overhaul. Please meditate on that.

Agree with you Eli about SELF. Self is the spirit of anti-christ. It's vitally important to repent of SELF; and humble ourselves before the Lord. To relinquish what we think & agree with the Word of God 100%. This article gives a deeper understanding of Mormons. Thank you! Margie

Eli, what a blessing to read this!! I would hug you now, if you were here. Praise God for growing His children and for giving us the Gospel. Thank the Lord for Jesus, and for putting to shame the works of the flesh!!

As a response to Jesse's question, if I may quietly say a word or two, I believe the Lord is justified in giving mankind conditions of fulfillment which we "cannot" fulfill because our inability is moral and not physical, and it is self-inflicted. The sense in which man "cannot" is this: man cannot because he will not, so resolutely that he will never, unless his nature is first transformed by God's grace. His nature under sin is to rebel against faith. He distrusts God and he loves death and self-worship.

Yet God, in His depth of wisdom, has hidden this mysterious work of regeneration within the context of a command to obey. By this the Lord reveals man's inability and readies him to acknowledge the sudden change as an act of God's grace.

Grace to you, Jesse. Thanks, Eli.

I can tell you what the missionaries thought. They thought this guy is trying to say that we don't have to keep the commandments, do good works, etc. because Christ paid the price for all of your sins ... so sin all you like it's pointless not to. Why try to live a Christ-like life to the best of your ability? That would be their take-away from the conversation.
You assume they are trying to earn their salvation. When in reality, they Love Christ and are dedicating their lives to his service. They would do it even if their was no reward. Why? Because Christ deserves their very best (flaws and all) so they willingly give it to him. Then they meet someone that tells them they don't have to. But, they want to because that is where their heart is. Serving Christ is it's own reward. Mormon's don't serve Christ for gain of any type. They serve him free of pay (no paid ministry, etc.) because they want to, because they love him, etc. I think that is the part that you don't "get" when you do the works vs. grace argument with LDS. Yes, they believe in grace and they show their love for Christ with their works (fruit). Interesting read though.

It is common to fool yourself into thinking you love God and have dedicated your life to Him, thinking you serve Him with your whole heart. Paul did that. What Paul didn't see (the guy who wrote Romans 3:10,11 above) was that he was a wretched sinner who was self-righteous, blind, stinking with pride and religious arrogancy. He later admits that he was full of lust and covetousness (Romans 7) but he was blinded by his false spirituality.

Too often people who think they are serving God are only serving themselves, speak of righteousness and holiness but they don't know what they are talking about, and all the time they are living in sin from within and from without. The only remedy for spiritual blindness is light from heaven, and I pray God pours out such light upon the Mormons, and upon yourself, that they would see the truth; the hypocrisy, pride and presumption, and fall on their faces before God.

The good news is that Christ died for sinners, even religious ones. But first we have to agree with God, that Jesus didn't come to save the righteous but the sinners.

Want to see what it looks like to serve God? Look at Jesus Christ. Anything less than that is not worthy of the everlasting God. Did not even John the Baptist say, "I am not even worthy to untie his sandals?"

Eli, you probably already saw this, but this is right from the LDS website.

Recognize that you have sinned and feel sincere sorrow for what you have done.
Stop sinning and strive never to commit sin again.
Confess your sins to the Lord and ask for forgiveness. If you have sinned against another person, you must ask that person for forgiveness.
Make restitution?. You should do everything in your power to correct any problems your actions may have caused.
Keep the commandments?. Obeying God’s commandments brings the power of the gospel into your life and gives you strength to abandon your sins. Keeping the commandments includes giving service, forgiving others, and attending Church meetings.
Acknowledge the Savior. The most important part of repentance is the realization that forgiveness comes because of Jesus Christ. The Savior suffered for your sins so they can be put behind you, even the serious ones.

Atonement
The suffering and death of Jesus Christ, through which resurrection is provided to all mortals and eternal life is offered to those who have faith in Christ and repent of their sins.


What Folly! Thanks for sharing this story Eli.

May all the glory be to Jesus Christ the Righteous One.