Jesus, the Shepherd and Door of His People 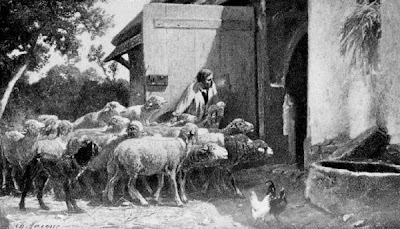 "Verily, verily, I say unto you, He that entereth not by the door into the sheepfold, but climbeth up some other way, the same is a thief and a robber. But he that entereth in by the door is the shepherd of the sheep. To him the porter openeth; and the sheep hear his voice: and he calleth his own sheep by name, and leadeth them out. And when he putteth forth his own sheep, he goeth before them, and the sheep follow him: for they know his voice. And a stranger will they not follow, but will flee from him: for they know not the voice of strangers." - John 10:1-5

In the tenth chapter of the Gospel of John, our Lord Jesus Christ, in His discourse with the Jews, gave the world some of the most wonderful truths contained in a short series of familiar parables. These parables are the famous 'sheep parables' which many of us are well acquainted with, though I think it will be profitable to expound upon them, and write about some of the things God has been revealing to me in these passages.

One of the first mistakes people make in reading this portion of Scripture is that the object of who is being spoken of is often misunderstood. "Verily, verily, I say unto you, He that entereth not by the door into the sheepfold, but climbeth up some other way, the same is a thief and a robber." To this it is usually taken as speaking of those who are trying to get to God some other way than Christ; those who attempt to jump over the wall to eternal life instead of going through the rightful door, Jesus Christ. However, this is not so, for the next verse states: "But he that entereth in by the door is the shepherd of the sheep." It is clear that this is not speaking of the sheep trying to get to God, but of the shepherd coming to the sheep, and also of those false prophets (strangers) who attempt to come in and steal the sheep. "He that entereth not by the door into the sheepfold..." Jesus is warning the people of false teachers who come to the sheep as thieves and robbers.

The significance of this is that Christ is not only the Way by which we are saved, but He Himself also is the Shepherd that leads us into that Way. He did not merely send prophets to preach about salvation... He Himself came to earth and showed unto men the Way of salvation. He did not point the way, as so many religious teachers do, but He declared to all men, "I AM the Way." The Shepherd Himself is the Door, and His sheep hear His voice, and follow Him through the Door into green pastures. The Lord Jesus Christ is both the Door of salvation, and the Shepherd that leads us through the Door of salvation.

"Verily, verily, I say unto you, I am the door of the sheep. All that ever came before me are thieves and robbers: but the sheep did not hear them. I am the door: by me if any man enter in, he shall be saved, and shall go in and out, and find pasture. The thief cometh not, but for to steal, and to kill, and to destroy: I am come that they might have life, and that they might have it more abundantly." (John 10:7-10)

All that ever came and preached to men some other way to be saved other than by the sacrifice of the Son of God was a thief and a robber, and all that have ever come since Christ, and preach another "door" other than the true Door, seeks not the good of the sheep, but their destruction. Jesus Christ is the everlasting Door whereby men MUST be saved. He is the "Lamb slain from the foundation of the world", and Christ alone is the sole foundation for all those who will inherit eternal life. Let this be known, preacher! Declare it loud and strong! As one who is an overseer to the flock of God (Acts 20:28-31), preach Christ and Him crucified, for if He be lifted up He shall draw all men unto Him. There is no other Name by which men must be saved.

Christ is the good shepherd, and the good shepherd is defined as "laying his life down for the sheep." "For even the Son of man came not to be ministered unto, but to minister, and to give his life a ransom for many." (Mark 10:45) The Lord Jesus Christ did not come the first time to be served, but to serve, just as the shepherd does not enter the sheepfold to be served by the sheep, but to serve the sheep; to heal their wounds, to feed them milk and grain, and to lead them out into pleasant pastures. It is now, having been redeemed, that we serve the King of kings, just as the flock serves the purpose of the shepherd once they are led forth into the place where he bids them. "I am the good shepherd, and know my sheep, and am known of mine."

Now this is the question for the ministers of the flock today: are you a good shepherd, or are you a hireling? "He that is a hireling, and not the shepherd, whose own the sheep are not, seeth the wolf coming, and leaveth the sheep, and fleeth: and the wolf catcheth them, and scattereth the sheep. The hireling fleeth, because he is a hireling, and careth not for the sheep." The hireling is tending the sheep only for selfish gain, and not because he loves the sheep. The hireling is using the sheep for his own profit, but once there is danger he no longer cares what happens to them. The hireling sees that a sheep is missing from the flock, but is too lazy to go and search for it that he might find it. I am sad to say there are many hirelings overseeing the Church today.

"For the Son of man is come to save that which was lost. How think ye? if a man have a hundred sheep, and one of them be gone astray, doth he not leave the ninety and nine, and goeth into the mountains, and seeketh that which is gone astray? And if so be that he find it, verily I say unto you, he rejoiceth more of that sheep, than of the ninety and nine which went not astray. Even so it is not the will of your Father which is in heaven, that one of these little ones should perish." (Matthew 18:11-14)

When God became a man and dwelt among us, it was because He came to seek and to save that which was lost. The whole world was lost, separated from their God, because of sin. "All we like sheep have gone astray; we have turned every one to his own way..." (Isaiah 53:6a) Through our pride and self-will, each one of us left the safety of the Shepherd and wandered away to seek our own fortune; but we quickly fell victim to the wolves, the jagged ranges and the perilous night. Our loving Shepherd saw that we were missing and came running over the mountaintops and through the valleys in search for the missing sheep. The Scripture tells us how Christ came to give His life a ransom for many... "and the LORD hath laid on him the iniquity of us all." (Isaiah 53:6b) Bloodied, bruised and beaten, Jesus hung upon the cross bearing our sin in His own body so that the righteous judgment of the Law could pass over us, we who rightly deserved it. Through the death of the Son all men everywhere can be saved from the judgment of sin. But now Christ is alive from the dead! And the Scriptures says that "whosoever shall call upon the name of the Lord shall be saved!" (Romans 10:13) Little lamb, do you not hear Him calling? Call upon your Shepherd! You who are stuck in the thorny thicket, lost and separated from the flock, let your bleating cry sound forth into the night, for the good Shepherd searches for you, and when you call He shall hear you, and He shall swiftly come, and shall lift you onto His shoulders, and shall carry you back to the safety of the Father's sheepfold. Yes! Call on the name of the Lord Jesus Christ this very day, and you shall be saved!

Beautiful, and encouraging brother. May we seek to save the lost with the message of the "Great Shepherd"

Like the Shepherd who was out countin the sheep in His flock, but the count was off, one was missing you should have seen his face drop. And leaving the 99 behind, no matter what the cost, He ran out into the field to find that little lamb that was lost. And bring him back and rescue him from the wolves and the thorns and to feed him cause he's too dumb to find his way home and when he found him, he picked him up and put him on his shoulders wide and danced a dance of jubilee down the mountainside!!