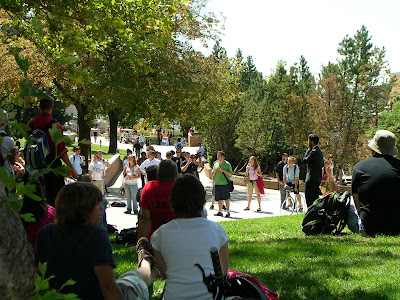 Dear brothers and sisters in Christ,

Since leaving for Utah earlier this September, God has done many marvellous things for which we are bound to give Him all the glory. To say the least, Cache Valley and the surrounding areas have had the Gospel boldly proclaimed to them on campuses, through newspapers, by tracts, via online, etc, which has caused no small stir among the densely populated LDS community here; and not only among the Mormons, but this time in Utah has proved to be a tremendous blessing for myself, and for the Christian body here in the valley, as young and old stand together in "one spirit, with one mind striving together for the faith of the Gospel." (Philippians 1:27) It has been wonderful to see so many Christian brothers and sisters rise up to answer the call of the Great Commission in there own city. Bless the Lord!

University of Utah, Salt Lake City, was the first campus we preached the Word on, and the Lord blessed us with two great days of proclaiming Jesus Christ to both large and civil crowds. It was a great blessing to preach again with my old traveling mate, Evan Schaible, and also to be joined by several locals from Logan and the surrounding vicinity. Brother Brad Scheelke of Oasis Books, a literature mission in Logan, provided many free books to be given away during the course of the outreach. I began preaching the first day and it wasn't long before a crowd of about 100 gathered, and then Evan got up to preach, a class change hit, and the crowd nearly doubled in size. 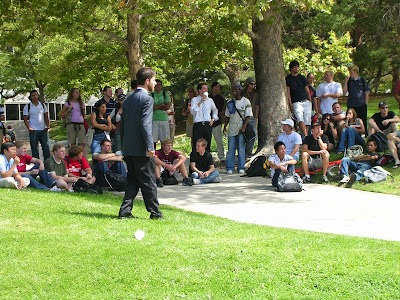 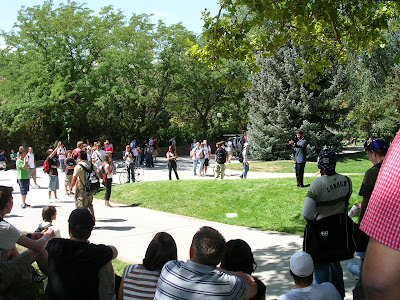 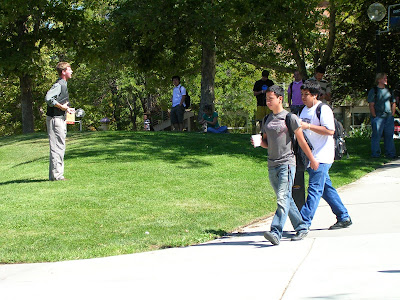 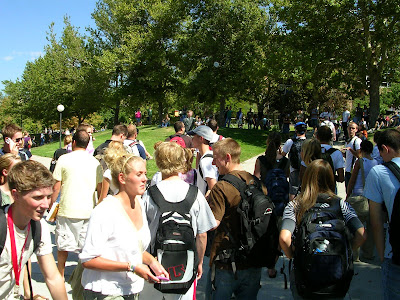 A photographer for the university's newspaper snapped some photos of Evan. We made the paper almost immediately. 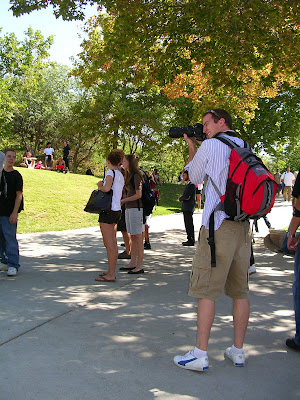 The second day was also a wonderful day of evangelism, yet was quite different. Students were very civil and sat upon the grass making the atmosphere more like a Bible study. Brother Brad Scheelke spoke to students for several hours about sin, repentance, righteousness, forgiveness and God. It was awesome to see students asking questions and learning about what the Scriptures teach about salvation. 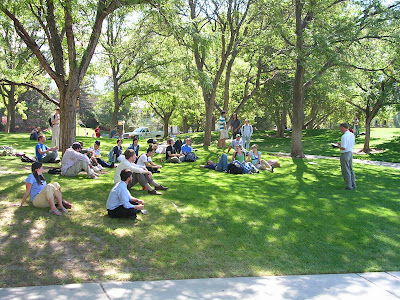 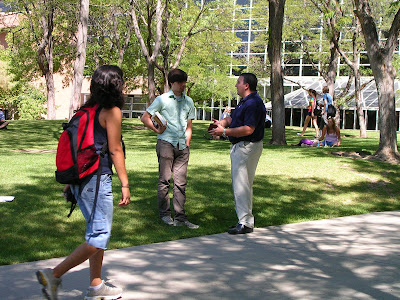 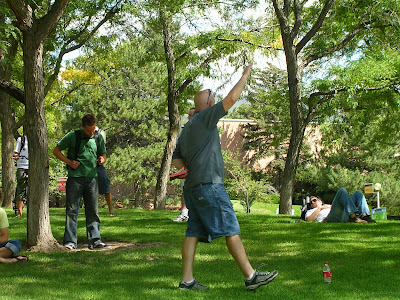 Above, brother Tony Barraclough preaches to students on the lawn infront of the university's Student Center. I first met Tony while preaching in Las Vegas last school year. 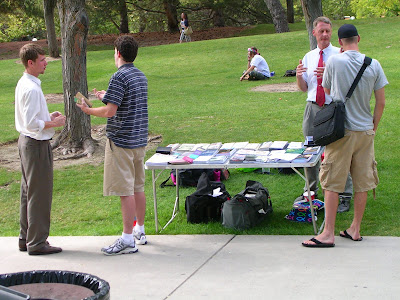 Brad and Evan speak to inquirers around the book table.

One of the great strongholds in Utah is Mormonism, an American cult that was formed in the 1830's by a young man named Joseph Smith. Today, there are nearly six million Mormons in the United States alone. Logan, the city where I am currently staying, has been said to be the highest concentration of Mormons in the entire world. I will be writing more about Joseph Smith and those who follow him in the future. While on UofU, approximately 40% of the students we encountered were LDS.

Here is a video from the University of Utah, it's about 20 minutes long and deals with many different issues that were raised while we were on campus.

Praise God for the work He is doing by His Spirit in this strange and difficult State. It is an honor to lift up the name of Jesus to so many who have never heard the real truth of the Son of God. Please pray for us, saints, while we continue to reach out to these poor blind people. They desperately need your prayers; that Satan would let them go and that the glorious light of Christ would shine upon them and set them free from all that binds them. Praise the Lord, for He is doing it!

I will post a new update very shortly, for we have been preaching for several weeks already and I have much to write about. Until then, the Lord bless you and keep you all. Grace and peace in Jesus Christ.

Love your servant in the Gospel,
-Eli 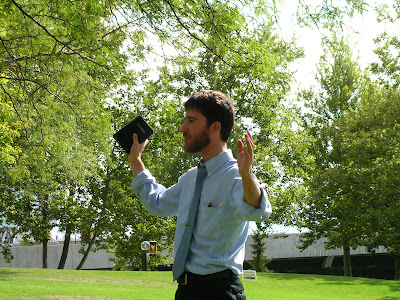 I'm encourage and excited to hear this brother. Keep it up - 1st Peter 3:15-16 mentality. Mmmm...Jesus. May your truth prevail in the midst of darkness and falsehood.

Hi Eli
Thanks for this exciting update! Praise God for you and the other brothers who are preaching the truth to these dear people who have been held in darkness by the devil! You are fulfilling (2Tim 2:23-26)!!
Our prayers are with you.
Gramp

Man...they are so deceived! I thank God for you brother. After watching this video, I think I understand more about where you are coming from...

Hey Eli, this is Jon Adams from USU (we discussed the Mosaic Law, if that helps you remember).

I was talking to my friend Chris Cooke from ISU, and you came up in our discussion. Did you run into some problems there? I heard you were accused of harassing the former student body president. Or was that another preacher? Either way, I bet it's a specious accusation.

I again wanted to thank you for spending so much time at our campus. USU was in desperate need of controversy, haha. I hope you do decide to settle in Cache Valley, because I feel we'd have a lot to learn from each other.

I'm a resident assistant here, and I was wanting to put together a religious diversity panel for my residents. I want to invite a Hindu, Muslim, Mormon, etc. I'll be on it as the atheist, and I was wondering if you'd like to be on the panel as a Christian. Just let me know if this is something you could do sometime in the next few weeks.

Lastly, I've posted a few blogs about religion to my Myspace. I'd love for you to peruse them if you have the time.