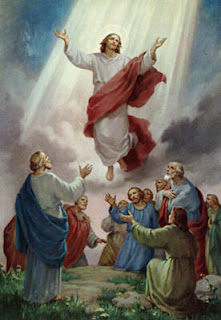 "Ye men of Galilee, why stand ye gazing up into heaven? this same Jesus, which is taken up from you into heaven, shall so come in like manner as ye have seen him go into heaven." - Acts 1:11


The eleventh verse in Acts chapter 1 reveals to us the very first words spoken immediately following our Lord Jesus Christ's ascension into heaven; a message of foremost importance which God in His wisdom delivered to the awe-inspired apostles as they stood breathlessly gazing up to heaven on the Mount of Olives. Jesus had just ascended, and two angels suddenly appeared to announce again the promise of our risen Saviour's future return. What a fitting time for such a proclamation! How this would infuse hope and strength into the Apostles' hearts! It would do us well to seriously examine such an announcement as this, for I believe the reason why there is so much confusion surrounding the doctrine of the second coming of the Lord is because we have failed to take to heart this first and most fundamental Scripture concerning it!

Therefore let us look at the whole passage together, starting at verse nine:

Act 1:9 And when he had spoken these things, while they beheld, he was taken up; and a cloud received him out of their sight.
Act 1:10 And while they looked steadfastly toward heaven as he went up, behold, two men stood by them in white apparel;
Act 1:11 Which also said, Ye men of Galilee, why stand ye gazing up into heaven? this same Jesus, which is taken up from you into heaven, shall so come in like manner as ye have seen him go into heaven.
Act 1:12 Then returned they unto Jerusalem from the mount called Olivet, which is from Jerusalem a sabbath day's journey.

Right away we notice a very important phrase, "this same Jesus". Oh, I am glad the Holy Spirit inspired the angel to say this little phrase! For He knew that in the future many false doctrines would arise to try and confuse this very solemn fact. Today I have heard the strangest teachings put forth on the Second Coming of Christ... some have said that the Church, the corporate Body of Christ, is the fulfillment of the coming of the Lord to earth. Others have said that Jesus has already returned in a spiritual or ethereal way. But that is not what our Bible says. "This same Jesus!" It is He, the risen Lord, whom we are expecting.

That 'this same Jesus' is to be clearly represented upon our minds is no light matter according to the Holy Scriptures. Paul was full of godly jealousy to protect the Bride of Christ from similar error. In 2 Corinthians 11:4 we read, "For if he that cometh preacheth another Jesus, whom we have not preached, or if ye receive another spirit, which ye have not received, or another gospel, which ye have not accepted, ye might well bear with him." Peter, when preaching to the Jews on the Day of Pentecost, emphatically declared, "Therefore let all the house of Israel know assuredly, that God hath made that same Jesus, whom ye have crucified, both Lord and Christ." (Acts 2:36) Jesus Christ is the same yesterday, today and forever. (Hebrews 13:8) Anytime the Bible is speaking about Jesus, it is never meaning another Jesus in some alternative way; it is always referring to this same Jesus, "the man Christ Jesus", who was born of a virgin, crucified on a cross, buried in the grave and resurrected the third day.

Therefore the Jesus the angel is speaking of is the same Jesus who minutes earlier stood before the apostles giving them their marching orders to go and be His witnesses in "Jerusalem, and in all Judea, and in Samaria, and unto the uttermost part of the earth." Observe how many times He is mentioned within our short passage:

-And when He had spoken these things
-He was taken up; and a cloud received Him out of their sight
-And while they looked steadfastly toward heaven as He went up
-As ye have seen Him go into heaven

The subject is clear: Jesus, the same Jesus who ascended before their very eyes into the clouds of heaven, will so come again in like manner as they had seen Him depart.


IN LIKE MANNER
We come now to examine the actual details of our Lord's ascension, for as the angel announced, "This same Jesus, which is taken up from you into heaven, shall so come in like manner as ye have seen him go into heaven", and therefore such details illustrate a direct parallel with Christ's future return. Again, I thank the Holy Spirit for inspiring these words, for now we find in such a simple announcement exceedingly useful prophetic insights.

1. The first parallel we shall notice is that Christ ascended from earth to heaven, and therefore He shall return from heaven to earth. There are many people who believe that Jesus will not again return to earth but will only appear in the sky, however this passage does not allow for such an interpretation, nor does the whole of Scripture for that matter. The Word of God is clear that when Jesus comes He shall descend from heaven to earth as our text reasonably indicates. Christ shall once again set His foot down upon the earth, only this time as earth's rightful triumphal King, and then shall be the times of the restitution of all things, for as it was at the beginning, so shall it be in the end, when once again "the tabernacle of God shall be with men." What a wonderful conclusion!

2. The second parallel in this passage is that of His ascension in the clouds. "And a cloud received them out of their sight." This is a foreshadowing of Christ's final return in the clouds, as Jesus Himself stated in Matthew 24:30, "And then shall appear the sign of the Son of man in heaven: and then shall all the tribes of the earth mourn, and they shall see the Son of man coming in the clouds of heaven with power and great glory." There are numerous verses in both the Old and New Testaments that foretell the great day of the Lord, when Messiah shall descend in the clouds of heaven. Consider the psalmist in Psalm 104, who spoke of the majesty of the Lord's power, singing, "Who maketh the clouds his chariot: who walketh upon the wings of the wind." (Psalm 104:3) The Apostle John wrote in the opening of the Book of Revelation, "Behold, he cometh with clouds; and every eye shall see him, and they also which pierced him: and all kindreds of the earth shall wail because of him. Even so, Amen." (Revelation 1:7) It is not an accident that this detail is mentioned in our text.

3. The third parallel, and most important of all, is that Jesus ascended visibly in the sight of the Apostles; a fact that will again be realized when Christ appears a second time in the full vision of all the world. There was nothing secret or invisible about His ascension. Notice how the Spirit accents this detail by its strong reiteration within the text; He wants us to understand this critical point:

-While they beheld, he was taken up
-And a cloud received him out of their sight
-And while they looked steadfastly toward heaven as he went up-Ye men of Galilee, why stand ye gazing up into heaven?
-Shall so come in like manner as ye have seen him go into heaven

What care the Holy Spirit took in choosing such words! It is not surprising that this same emphasis is found all throughout the Scriptures which deal with our Lord's second coming. As we have already read in Revelation 1:7, John does not neglect to highlight this very truth: "...every eye shall see him", and also as we have read of Christ's own words in Matthew 24:30, "...they shall see the Son of Man coming in the clouds of heaven with power and great glory." When the Lord returns what a sight that will be to all the inhabitants of the earth! Jesus said "as the lightning cometh out of the east, and shineth even unto the west; so shall also the coming of the Son of man be." (Matthew 24:27) There is nothing secret about this at all.

4. The last parallel we can draw from this passage is found in the last verse, "Then returned they unto Jerusalem from the mount called Olivet, which is from Jerusalem a sabbath day's journey." The place from which Jesus ascended was the Mount of Olives, and to that very place will He return once again, setting His foot down, when He comes to be glorified in His saints and rule the nations with a rod of iron. To this we turn to the prophet Zechariah, the fourteenth chapter and read, "Then shall the LORD go forth, and fight against those nations, as when he fought in the day of battle. And his feet shall stand in that day upon the mount of Olives, which is before Jerusalem on the east, and the mount of Olives shall cleave in the midst thereof toward the east and toward the west, and there shall be a very great valley; and half of the mountain shall remove toward the north, and half of it toward the south." (Zechariah 14:3-4) It is no coincidence that today there is a major fault line that runs under Jerusalem and through the Mount of Olives, and if there should be a great earthquake then that mountain would split entirely in two forming a great valley from the Mediterranean Sea in the west to the Dead Sea in the east. We know that when Jesus Christ returns this will be a reality, a direct fulfillment of this prophecy in Zechariah.

I find it extraordinary that throughout the Bible there is only one hope and one glorious coming ever expected at the end of the age, whether it be from the scroll of the prophet Isaiah to the Book of the Revelation of John, from the Olivet Discourse to the angelic announcement after the ascension, or from Enoch the seventh from Adam to the letters of the dear Apostle Paul. There is but one event described, and only one event ever anticipated. That one event is our blessed hope, the glorious appearing of our great God and Saviour, Jesus Christ.

May we never lose sight of the Church's great expectation.
Posted by Eli at 10:29 PM

Eli, what wonderful godly insight and wisdom. Thank you for sharing. May God bless you.

That hope that Jesus has given us, of his return. Amen! "Every eye shall see him"! It will not be a secret or quiet return. The trumpet will sound! Praise God!