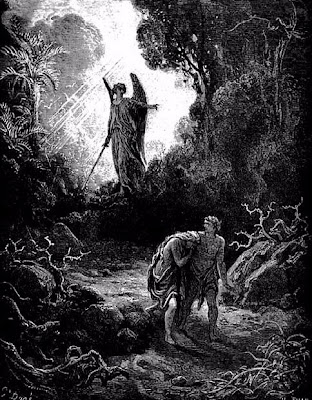 "Because the creature itself also shall be delivered from the bondage of corruption into the glorious liberty of the children of God. For we know that the whole creation groaneth and travaileth in pain together until now. And not only they, but ourselves also, which have the firstfruits of the Spirit, even we ourselves groan within ourselves, waiting for the adoption, to wit, the redemption of our body." - Romans 8:21-23

The subject of the Second Coming of Jesus Christ is of unprecedented and uncalculated importance to the Body of Christ, for how we view the doctrine of the Lord's future return causes no small impression upon our complete understanding of God, the Bible, life, the world, salvation, damnation, and so on. It is not just a mere hope of whimsical fancy, but it touches upon the deepest sensitivities of God's redemptive plan for His entire creation. Redemption, as a theological and eschatological reality, has been almost entirely ignored by the Church, and in so doing we have found ourselves content to flounder in the puddles next to the vast ocean of prophetic revelation.

Unknown to many, there are actually two sides to the coin of redemption, though they are not proportionate to one another. One side of redemptory grace is only but a gateway into the other far more greater and glorious domain of redemption. There are indeed two sides, but one side exceedingly eclipses the other. On the one hand, we have the redemption of the individual; a man is saved from the penalty of his sin. He places His faith in the Lord Jesus Christ and is instantly cleansed of his burden of guilt and translated out of the Kingdom of darkness and into the Kingdom of light. Praise God! "I say unto you, that likewise joy shall be in heaven over one sinner that repenteth." (Luke 15:7) One might wonder what could be more wonderful than this? Oh, but my dear reader, let us look to the second and more glorious side of redemption to which nearly the entire substance of the Word of God is concerned, and into which this initial redemption experience brings us. That is: God's ultimate prophetic plan for the redemption of His creation.

The Lord Jesus Christ's work of redemption is forever incomplete until He consummately returns to earth as He promised: resurrects our bodies from the earth, breaks the curse of sin upon the earth, and establishes the Kingdom of God in earth. The Second Coming of Christ, and all that it contains, is alone what is called our "blessed hope" to which all believers eagerly anticipate. As Peter exhorted, "Wherefore gird up the loins of your mind, be sober, and hope to the end for the grace that is to be brought unto you at the revelation of Jesus Christ." (1 Peter 1:13) I want you to know, dear reader, that the 'hope' that the Scriptures speak about is not a hope of going to heaven; it never has been and it never will be. The true Apostolic hope is literally and totally the hope in the resurrection of the dead as a direct extension of the belief in the resurrection of Jesus Christ from the dead. Because He lives, we also shall live. "Blessed be the God and Father of our Lord Jesus Christ, which according to his abundant mercy hath begotten us again unto a lively hope by the resurrection of Jesus Christ from the dead." (1 Peter 1:3) Any degradation of this doctrine is a degradation of the doctrine of Christ's resurrection. It was for this reason that Paul declared that he was on trial in Acts 23:6, "...of the hope and resurrection of the dead I am called in question." At the Second Coming of Jesus Christ we shall finally experience total redemption from the bondages of sin. Not only do we obtain freedom from the guilt of sin today, but we shall also obtain freedom from the consequences (or curse) of sin that befell man when Adam and Eve sinned in the Garden. Then, and only then, shall we fully comprehend the promise: "shall not perish, but have everlasting life".

And not only we, but also creation itself shall experience this redemption. "For the creature was made subject to vanity, not willingly, but by reason of him who hath subjected the same in hope." (Romans 8:20) Before Adam sinned, animals did not devour one another but ate of the grass of the field (Genesis 1:30). After Adam sinned, the earth was cursed and creation became disfigured and perverted insomuch that the animals began to eat and be eaten by one another. What God had declared "good" had through sin become corrupt. But thanks be to God Who delivers us from this body of death!, the Scriptures foresee a time when once again, "The wolf also shall dwell with the lamb, and the leopard shall lie down with the kid; and the calf and the young lion and the fatling together; and a little child shall lead them. And the cow and the bear shall feed; their young ones shall lie down together: and the lion shall eat straw like the ox." (Isaiah 11:6-7) When shall this be? Verse 4 and 5 tell us, when "with righteousness shall he judge the poor, and reprove with equity for the meek of the earth: and he shall smite the earth with the rod of his mouth, and with the breath of his lips shall he slay the wicked. And righteousness shall be the girdle of his loins, and faithfulness the girdle of his reins." This is a perfect description of Jesus Christ's return (see Revelation 19:11-16). Christ is coming again to bring about in the earth a divine work of total redemption. "For the earth shall be full of the knowledge of the LORD, as the waters cover the sea." (Isaiah 11:9)

The implications of this are unlimited. Anything less is not redemption at all.

Imagine, in closing, if Jesus Christ did not promise to return. Imagine that there is no promise of the resurrection of our bodies, the redemption of the earth, nor the coming Kingdom of God. If this were the case then Satan has indeed won a great victory. He has succeeded in ruining God's good earth, forfeiting mankind's intended dominion in it, destroying our physical bodies so that we must spend eternity as "souls under the altar", and therefore "in this life only we have hope in Christ." (1 Corinthians 15:19) Not only that, but if we are not resurrected and do not inherit the earth, then there is no necessity for the resurrection of Jesus Christ, for in fact, there would BE no resurrection of Jesus according to Paul: "But if there be no resurrection of the dead, then is Christ not risen." (1 Corinthians 15:13) And what's worse, "If Christ be not raised, your faith is vain; ye are yet in your sins!" (15:17)

Blessed be God this is not the case! In Christ Jesus there is TOTAL redemption.
Posted by Eli at 5:56 PM

Hi Eli: Looking forward to that day when our redemption will be complete. It will be a blessed day in Christ. Would like to share Luke 21:28 And when these things begin to come to pass, then look up, and lift up your heads; for your redemption draweth nigh. Our blessed HOPE!! In His Harvest, Margie

It is a slippery slope to compromise the literal interpretation of the millennium. The saints of the Old Testament, the Apostles of the New Testament, and the Early Church Fathers believed with all their hearts that the Kingdom of God would be established in the earth at the coming of the Lord. It was the Roman Catholic Church that rejected this doctrine because of convenience for it didn't fit their goals. We, today, need to hold fast to the things delivered to us of old, the sounds word, continuing in the things which have been taught, contending earnestly for the faith once delivered to the saints.

Oh, let us pray that ancient prayer with meaning!
"Thy Kingdom come..."