The Wrath to Come 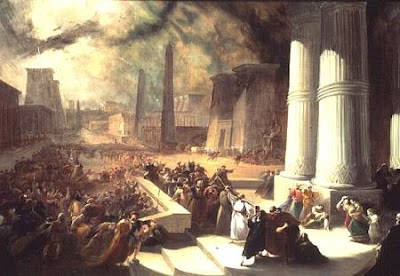 "And to wait for his Son from heaven, whom he raised from the dead, even Jesus, which delivered us from the wrath to come." - 1 Thessalonians 1:10


One of the common arguments used to support a pretribulational rapture is the belief that since the Bible says God's people are not appointed unto wrath (1 Thessalonians 1:10, 5:9) then the Church will therefore not go through the great tribulation, which, they claim, is characterized by the pouring out of the wrath of God (Revelation 15:1, 16:1). If God pours His wrath out upon the world during the final years of mankind, then the Church cannot be there. This reasoning has influenced many Christians into a false hope, for the argument is based upon a misunderstanding of the nature of the wrath of God.

-Orge is defined as judiciary wrath, or retributive wrath, being punishment for crimes as implemented by a judge.

-Thumos is defined as passionate anger that flares up but after subsides.

An example of the word thumos can be found in Acts 19:28, "And when they heard these sayings, they were full of wrath [thumos], and cried out, saying, Great is Diana of the Ephesians." Notice that the wrath here spoken is not a justifiable wrath against transgression, but the flaring up of anger that comes from passionate emotion. When someone says they have a bad temper, they are talking about this thumos wrath, not the retributive wrath of calculated justice. The word thumos is only found 18 times in the New Testament and always describes this passionate type of wrath.

Orge wrath can be clearly seen in Romans 2:5-6, "But after thy hardness and impenitent heart treasurest up unto thyself wrath [orge] against the day of wrath [orge] and revelation of the righteous judgment of God; Who will render to every man according to his deeds." Here the wrath of God is portrayed as judiciary righteous judgment against the ungodly. Orge wrath is directly connected to transgressing the law of God: "Because the law worketh wrath [orge]: for where no law is, there is no transgression." (Romans 4:15) Sin deserves punishment, and that punishment is the orge wrath of God. The word orge is used 36 times in the New Testament and virtually always refers to the righteous legal judgment of God.

Now let us return to our immediate question. The pretribulationists claim that since God's people are not appointed unto wrath, we shall not experience the wrath of God poured out upon the world during the great tribulation as described in Revelation 15:1 and 16:1. With our new knowledge of Greek terminology, let's examine the key passages of Scripture used in their argument:

1 Thessalonians 1:10 - "And to wait for his Son from heaven, whom he raised from the dead, even Jesus, which delivered us from the wrath to come." The word 'wrath' here is orge, the judiciary judgment of God against sin. Praise God that we are indeed saved through the Blood of Christ from the retributive wrath of God when His righteous judgments shall be revealed! "Much more then, being now justified by his blood, we shall be saved from wrath [orge] through him." (Romans 5:9) Hallelujah! We are justified in His sight!

1 Thessalonians 5:9 - "For God hath not appointed us to wrath, but to obtain salvation by our Lord Jesus Christ." Again, the word used here is orge. Like in the verse above, Jesus has redeemed us from the punishment we deserved for our transgressions against the law of God! "Christ hath redeemed us from the curse of the law, being made a curse for us." (Galatians 3:13) Through our faith in what Christ has done we shall obtain salvation from the wages of sin. As John the Baptist said, "He that believeth on the Son hath everlasting life: and he that believeth not the Son shall not see life; but the wrath [orge] of God abideth on him." (John 3:36)

Revelation 15:1 - "And I saw another sign in heaven, great and marvelous, seven angels having the seven last plagues; for in them is filled up the wrath of God." Proceeding from the beginning of chapter 15 to the end of chapter 16, the vials of wrath are poured out upon the earth by the seven angels of God. Since this takes place before Jesus returns and during the great tribulation, the pretribulationists assert that the Church cannot be present, for they are not appointed unto orge wrath. What they have failed to see is that the word 'wrath' used here and throughout these two chapters is not orge wrath at all, but thumos wrath, the hot anger of God being demonstrated against a wicked world PRIOR TO the revelation of Jesus Christ, when He at last comes to tread "the winepress of the fierceness and wrath [orge] of Almighty God." (Revelation 19:15) When Jesus comes He shall judge the earth for all it's wickedness, bringing with Him the righteous retributive judgment of God against His enemies. He shall separate the wheat and the tares, and cast all those who obeyed not the Gospel into the Lake of Fire which burns for ever and ever. That, my dear readers, is the true orge wrath of God, of which we are saved from, and of which we are not appointed to. The thumos wrath of God is something entirely different.

God's wrath has been displayed all throughout history and will again be unleashed upon a wicked God-hating world in the last days; this is not surprising. But we are not to confuse God's thumos wrath with His orge wrath. When the Lord poured out the plagues upon Egypt in the days of Moses and Aaron, that was His thumos wrath; the passionate anger of the Lord expressed against that hardhearted and tyrannical nation, who oppressed His beloved people for 400 years. We must also remember that when God was pouring out the plagues upon Egypt, the children of Israel were preserved safely throughout it all. Likewise, during the great tribulation when the vials are poured out upon the earth, God's people will be protected safely throughout it all. When God closed the Red Sea over top of the pursuing Egyptian army, that was His thumos wrath bringing an end to the captivity of Israel. The Egyptians experienced God's thumos wrath when the waters toppled over them, but they experienced God's orge wrath when they lifted up their eyes in hell. In the same way, this sinful world will undergo God's thumos wrath against it during the great tribulation, and also when Jesus Christ physically destroys them at His coming, but this is nothing to be compared with the orge wrath men will experience when Jesus Christ sits upon the throne of eternal judgment. Oh Lord, God save us from that dreadful day!


FLEE FROM THE WRATH TO COME

Compare: When John the Baptist cried out at the river Jordan, "O generation of vipers, who hath warned you to flee from the wrath to come?", he wasn't referring to the great tribulation at the end of the age! How could he have been? For he was speaking to his own generation and pointing them to Christ. Likewise, when Paul wrote to the Thessalonians to "wait for his Son from heaven, whom he raised from the dead, even Jesus, which delivered us from the wrath to come", neither was he speaking of the great tribulation, for they have all now fallen asleep, yet their deliverance in Christ's still remains the same. This promise is for all believers of all times. Jesus, through His death, has delivered us from the wrath to come; the wrath that shall come upon the whole world from Adam to Antichrist, "and whosoever was not found written in the book of life was cast into the lake of fire." (Revelation 20:15) Glory to the Lamb of God who delivers us from the wrath to come!

"For I know whom I have believed, and am persuaded that he is able to keep that which I have committed unto him against that day." (2 Timothy 1:12)
Posted by Eli at 3:45 PM

Interesting comparison of Orge and Thumos, I'll try to keep that in mind! Thanks Brother! Micah

Nice! Maybe I am headed in your direction on this brother :)

You've made what God's wrath really is very clear. Much needed today, as Christians are looking for that great escape. God will give us his grace to endure, whatever we face. Just as the Lord told Paul in 2 Corinthians 12:9

9 And he said unto me, My grace is sufficient for thee: for my strength is made perfect in weakness. Most gladly therefore will I rather glory in my infirmities, that the power of Christ may rest upon me.