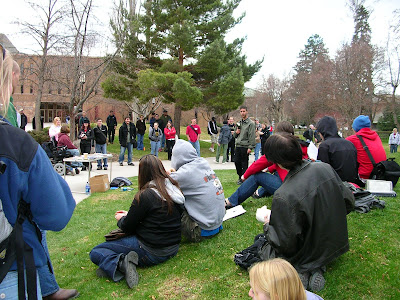 My apologies for the delayed update. Since we have been to Montana the internet access has been severely limited, but I am thankful to now write to you of our wonderful time spend up north. We flew out of Detroit to Billings, Montana the 1st of April then drove to a little place called Missoula where we resided for over a week, ministering on campus and also in the church which invited us. The entire week was a huge success and I feel it has been the highlight of this second semester for me.

University of Montana is an extremely liberal campus with a large homosexual community. Unknown to us, we arrived during Gay Pride Week; rainbow flags lined the pathways around the center of campus as we walked around Sunday night praying and examining the grounds. It would be an intense five days of spiritual warfare and gospel preaching. But praise God that He won for us the victory!

A video from the first day of preaching:

Each day we gathered around us crowds of over a hundred that were generally civil and inquisitive, however, there were a few days that the crowds got very rowdy and confrontational. 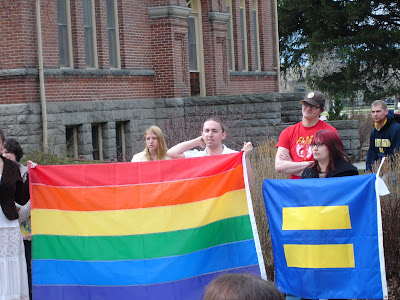 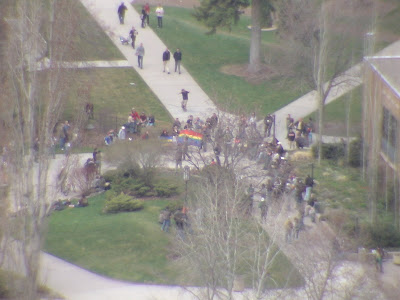 Miles climbed a great mountain to take that picture! A large group of homosexuals came out to our meetings with banners, flags and signs to oppose the preaching that challenged their sinful lifestyle. Many of them would scream at us in fits of rage as they came under conviction."The world cannot hate you; but me it hateth, because I testify of it, that the works thereof are evil." (John 7:7) 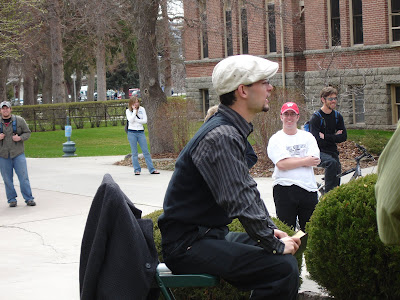 Jesse Morrell of Open Air Outreach joined up with us in Montana for the week. 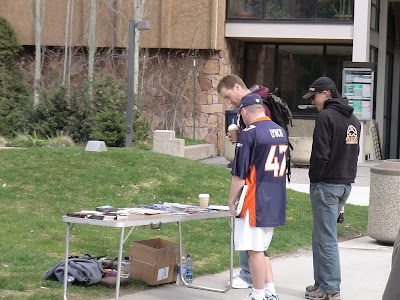 We also had a great little book table set up on this campus, with evangelistic literature and resources for Christians available for free. Students took many books and CDs. I especially liked this idea. 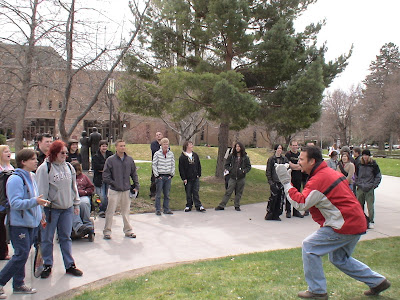 Above is Alan Taylor, a brother from Logan, Utah, who drove, along with another dear family from that area, all the way to meet us in Montana and to minister with us. This was Alan's first time open air preaching and he did a terrific job. What a joy and privilege to stand before men and proclaim the precious name of Jesus Christ! It is the Church's great honor to bear the light of the Gospel in this dark world.

As the days went on we were able to minister to many people's needs and speak to hundreds about the hope that we have in Jesus. Multitudes of students opened up, sharing their lives with us and hearing what we had to say. One student admitted that he was a drug addict and wanted help. Fortunately the church that was hosting us dealt specifically with needs like these and we were able to direct him towards them. Another young man, a geology student, attended our meetings all week and soaked up what we were saying like a sponge. Miles was able to talk to him the last day and minister the gospel to him. We had so many wonderful one-on-ones like these throughout our stay in Montana. It was truly a blessed time with lots of fruit. May many souls be saved!

Topics of discussion ranged everywhere from ethics to evolution. Two big strongholds on this campus were homosexuality and politics. On Thursday, a group of homosexual men marched defiantly into the middle of our meeting fully dressed as women, with make-up and dresses, etc. It was awful, but we continued to preach. I believe that many people there that day saw the utter depravity of this sinful behavior. "For this cause God gave them up unto vile affections: for even their women did change the natural use into that which is against nature. And likewise also the men, leaving the natural use of the woman, burned in their lust one toward another; men with men working that which is unseemly, and receiving in themselves that recompence of their error which was meet. And even as they did not like to retain God in their knowledge, God gave them over to a reprobate mind, to do those things which are not convenient." (Romans 1:26-28) I was able to speak to the students extensively on the subject of the Kingdom of God, and the government which is on the shoulders of Christ, and contrast it with the corrupt and failing systems of the world of men. The only government that works and has the right to reign is the government of Jesus Christ (Isaiah 9:6-7). Here is a video entitled, "Natural Government", dealing with this issue:

Our team made the campus newspaper everyday that week and I was also interviewed by the local radio station about the Gospel that we are preaching. With that publicity, we not only ruined Gay Pride Week, but the entire student body knew who we were and what are message was, and so the Good News was preached to the University of Montana. Praise be to God, who works all things for His glory! When it's all been said and done, it's all about the glory and honor of His Holy Name.

God bless you dear saints. Thank you to all those who continue to pray and support this ministry that has taken me all across this huge country; state to state, city to city... Your love is truly a blessing to my heart which refreshes me each day. Only a short while left and I shall be home once again. Until then, let us keep our eyes upon dear Lord Jesus, the author and finisher of our faith. None one of His promises shall ever fail us. I miss you all dearly,

Your brother and servant in Christ,
-Eli 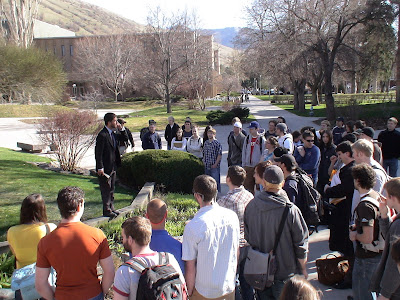 Eli, I just want to tell you that I love you dearly my brother and it is with the affection and longing of our great God and savior Jesus Christ that I long to see you and all the brothers again soon. To labor with you til we all come to glory!

Hey Eli!
Just wanted to say hello and let you know that I saw your parents and your brother Victor yesterday.
I was at the synagogue here in Fredericton for the Yom Hashoah service, and they were there as well.
God bless you brother!
-adam

Yes, amen! All praise be to God that His name was lifted high in glory on this campus. It was such a blessing to be there with you guys and minister together. My prayers go with you and with Team 2. May God continue to give you that spirit of power and of love and of a sound mind. May the Lord bless your time back home in Canada.

That's awesome, the reports have been missed for sure!

On a quick note, I'm sure that you did quite fine with the lady talking about the Prodigal Son after the video cut off, but man was she ever taking it out of context! She was using it to say that you don't need Jesus, but that you can live in your sin and God still loves you. God loved us before while we were still sinners (1 John 4:10), yes, but man, Luke 15 is about sinners and tax-collectors COMING TO JESUS. Luke 15:10 says: "In the same way, I tell you there is joy in the presence of the angels of God over one sinner who repents." The prodigal son repented. On a side note the father figure said to the older son that everything he owned would be his because he had stayed with him. This didn't diminish his joy that the younger son came back, but it's something to think about. Instead of thinking: "How long can I be a prodigal son and my father still love me?", we need to remember that the prodigal son "came to his senses".

Watching that clip also made me remember that I need to memorize Romans 1 and 2. Romans 2 talks all about how the kindness of God leads us to repentance! When I was watching the clip I was like: "Micah, come on, you know the answer to what she is saying!!", but I didn't have the word ready, you know? Thanks for reminding me that I need to know the Word of God better than I do!!

We love you Eli! We will continue to stand in prayer with you. God bless you! Micah and Katie