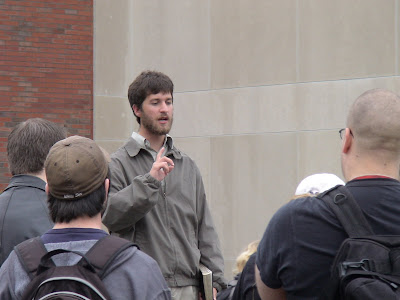 We had an awesome time at Ball State University in Indiana. A crowd drew and stayed for hours, even after it began to torrentially rain. There was a good mix of both Christians and non-Christians, so many were ministered to and encouraged. Some professing believers showed deep conviction over their hypocritical lifestyles. 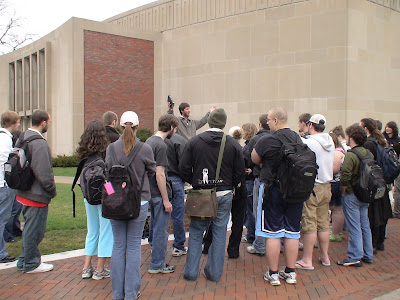 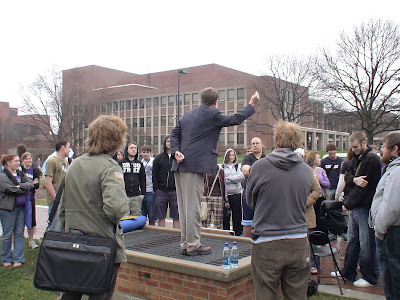 One Christian lady was so encouraged by what we were doing that she went and bought the three of us lunch. A group of atheists also tagged along afterwards, carrying on the discussion. It was a fruitful day spent preaching.

"For the preaching of the cross is to them that perish foolishness; but unto us which are saved it is the power of God. For it is written, I will destroy the wisdom of the wise, and will bring to nothing the understanding of the prudent. Where is the wise? where is the scribe? where is the disputer of this world? hath not God made foolish the wisdom of this world? For after that in the wisdom of God the world by wisdom knew not God, it pleased God by the foolishness of preaching to save them that believe. For the Jews require a sign, and the Greeks seek after wisdom: But we preach Christ crucified, unto the Jews a stumblingblock, and unto the Greeks foolishness; But unto them which are called, both Jews and Greeks, Christ the power of God, and the wisdom of God." (1 Corinthians 1:18-24) 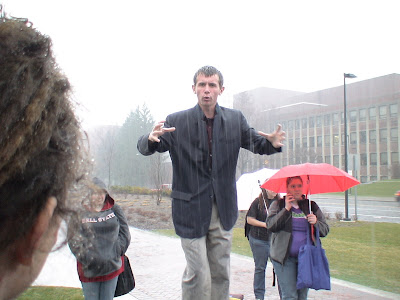