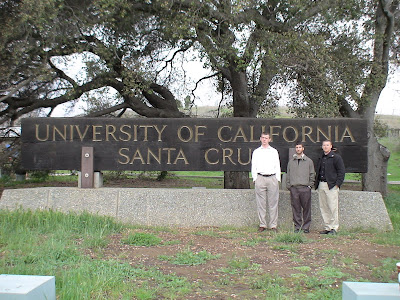 Our stay at UCSC was short and sharp. The campus is a beautiful one, spread out upon a vast landscape of forests, farms and hills, which made it difficult to find a good central location to preach the Word of God. The Student Union was located in a steep valley, and when we arrived we weren't sure how many people would be around to listen, however, Evan began to preach and instantaneously there formed a crowd of about 40 students.

Evan was doing a sound job of exalting the righteousness of God, yet around us many students were exhibiting terribly lewd behavior. Two girls set up a table behind us to give away condoms, and they kept shouting over Evan: "Free condoms, .25 cents!" It was so awful to hear everyone cheer and applaud them while Evan was preaching the suffering of Jesus on the cross. We were being mocked intensely; some students ran up to Miles and I and threw condoms in our faces. Two other girls began kissing in the middle of the crowd. Even the professors were cursing us.

Then all of a sudden, out of the crowd an angry student approached Evan and violently kicked over our briefcase. Immediately the police jumped in, and rather than subdue the crowd or stop the attacker, told us to leave campus or else we would suffer consequences. The entire situation was against us. I don't think one person wanted to hear the Bible being preached. When we had no other choice, we left campus. The crowd clapped and cheered as we walked through them.

"And whosoever shall not receive you, nor hear your words, when ye depart out of that house or city, shake off the dust of your feet." (Matthew 10:14)

It was very sad to leave, but it was even sadder to see the students reject the very God who gave them everything that they have. Jesus shed His precious blood for these dear people! Father forgive them!

Please pray for those at UC Santa Cruz who so fiercely opposed the gospel. May their hearts be softened, may their ears be opened, and may the light of God shine into their poor darkened lives.

God bless my dear friends. Yours in the service of Jesus,
-Eli

Be encouraged brother, you brothers are giving a testimony for the everlasting gospel of our Lord Jesus Christ.

That's tuff brother. Be encouraged though! I've been reading about David and in his youth, he was absolutely fearless in his faith in God! I love it when Goliath comes out representing human thinking, seeing only size and training and David says right to his face: "You come to me with a sword, a spear and a javelin, but I come to you in the name of the Lord of hosts, the God of the armies of Israel, whom you have taunted." Bam!

Eli you remind me of David and I encourage you today to walk in the same spirit of faith, defying Satan who opposes you, and walking onto each campus saying: "I come to you in the name of the Lord of hosts!". And pray for me that I would have this same courage here in Moncton!

Matthew 5 should put a smile on your face too : ) "Blessed are you when men revile you, and persecute you, and say all kinds of evil against you falsely, on account of Me. Rejoice, and be glad, for your reward in heaven is great, for so they persecuted the prophets who were before you." I would say you earned some hardcore heavenly currency on that campus!

We love you very much brother and we sure miss you. You will be in our prayers!

"Lord Jesus, thank you for Eli and his friends Miles and Evan. Thank you for their boldness to proclaim your gospel in all the world. Thank you for the encouragement that they are to all of us. I ask you to bless their time on each campus and give the students and professors ears to hear what you are saying. Silence the enemy as he hates their coming and bind the enemy as they preach your truth. Bless them with health, strength and times of refreshing in your presence. Provide for all their food and logging needs. Help them to forgive those who sin against them as you have forgiven us. Yours is the kingdom, the glory and the honor forever and ever, Amen!"

That's rough, sometimes you just have to dust your feet...

I thank God for you guys! Keep it up!

I pray that more Godly relationships be poured out among these students. God, bring forth Godly people who will testify of your mercies and grace! Make a way for Holy and Righteous relationships that the Gospel may be shared in peace! May Your love God, not a humnanly, earthly lusting Love, be the cornerstone. Please, oh God, Please. I cry out with desperate pleas! May you intervene.

Hey Eli.
Thanks for your heads up on McLaren. I can't say that I saw him play down what Jesus did on the cross for us in his book. The book did nothing but uplift me in my faith. I certainly enjoyed how he looked at the Christian faith through so many different lenses. And I would certainly say that he is unafraid to point out the best and worst of many traditions or views. I enjoyed the book very much, and know many others who did as well.
Blessings,
Adam O