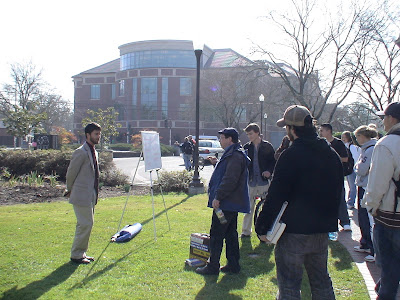 "I got born again today", a young man from Santa Rosa Junior College said to us as we were leaving the campus the last day of preaching. Like this, we saw wonderful fruit after two days of labouring on this college in northern California, which was a real encouragement after the last campus in Fresno. Praise God!

I began preaching when we first arrived and immediately there was a crowd that gathered to hear what was being proclaimed. Everything was very civil and a lot of good questions were being asked... even the Bible professor of the college attended our meeting. We could see clearly that he was doing a great disservice to the Kingdom of God by teaching the students that the Bible was not the Word of the living God, but simply mythological tales. Many students had been influenced by his teaching, so there was a lot of apologetics that were needed to reestablish the authenticity of the Scriptures. It was obvious that Bible could withstand all scrutiny, but mere apologetics can in no way soften a hardened heart.

One young man named Brady opposed and objected against what was being preached, but afterwards followed us as we were leaving and wanted to talk more about Jesus. It was amazing to see a visible change of heart in him; his eyes grew wide as he said, "Maybe my Christian uncle has been right all along!" Brady thanked us and eagerly took a new Bible. Some Christians on campus saw this and decided to have us sponsored to return the next day. 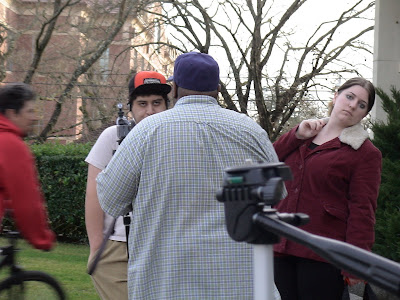 Brother Paul Kaiser of 'Reformed Evangelist' speaking with students at the end of the day.

Paul joined up with us the first day to preach and to do an interview with us for his website, www.reformedevangelist.com. After the interview, the Bible professor and a following of his students came out to challenge us, and so we talked with them long into the evening, even after it got dark. 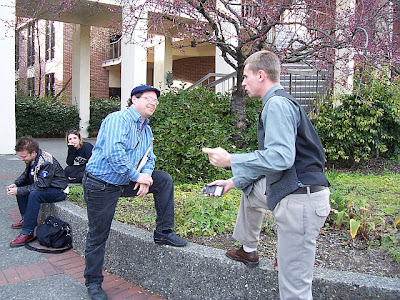 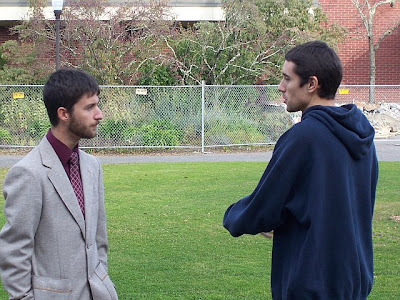 The following day it was raining, but even under umbrellas we gathered large crowds and had an excellent meeting. Since we were sponsored, the college allowed us to use their free speech podium which they call "Hyde Park", based on the famous Hyde Park in England. It was an awesome time of strong, clear, unashamed Bible preaching. It was a great blessing to see people come under conviction and others receive a real touch from the Lord.

"For we preach not ourselves, but Christ Jesus the Lord; and ourselves your servants for Jesus' sake. For God, who commanded the light to shine out of darkness, hath shined in our hearts, to give the light of the knowledge of the glory of God in the face of Jesus Christ." (2 Corinthians 4:5-6)

"For I am not ashamed of the gospel of Christ: for it is the power of God unto salvation to every one that believeth; to the Jew first, and also to the Greek." (Romans 1:16)

Thank you for your continued prayers and support, dear saints. May the Lamb that was slain receive the reward of His suffering! May Jesus Christ be lifted up that all men might be drawn unto Him. God bless. 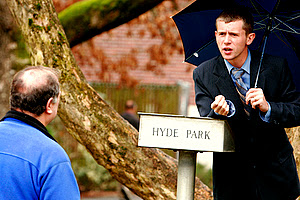 God bless you Eli, wish I could be there with you. I've got to tell you, I am struggling with envy and jealousy when I see the work you are involved in.

I've been using my noonhours to go door to door with the gospel in Shediac and also some of my weekends. Open air preaching has been a bit of drag here the past few weeks...a bit hard to find a crowd at the market that want's to stand too long in -15° temperature. Mind you I'm certainly learning how to communicate sin, judgement to come and the mercy of God within a very few sentences. Let's just say I've been "California Dream'n" lately for more than one reason!

Let me leave you with a verse for encouragement from Daniel 12:3

"And they that be wise shall shine as the brightness of the firmament; and they that turn many to righteousness as the stars for ever and ever."

Someone said, 'We shall have all of eternity to celebrate the victories, but we have only the few hours before sunset to win them.'

I'm praying for you. Keep keep'n on Eli.

That sounds great! An answer to prayer for sure! We will continue to keep you in prayer. God Bless! Micah and Katie

I watched the interview with the Bible Professor from Santa Rosa Junior College, I have a couple of thoughts.

1. It would have been much better if we could only hear from the two participents.

2. I honestly think the Professor made some very good points.
A. Did human beings create the Bible or not?
B. What is the evidence for either view?

Hello Anonymous, thank you for your questions.

A. Did human beings create the Bible or not?

We have to define "create". To say humans created the Bible implies from beginning to end the idea was conceived, written, embodied and preserved by man, but this is not the case. God is the one who created the Scriptures, which is why it is called the Word of God and not the words of men. The Bible is the actual Word of God to man.

I think perhaps a more appropriate word would be "pen"... Did human beings pen the Bible? The answer is yes. Scripture was written by holy men of old under the inspiration of the Holy Spirit. To say that God could not do this is limiting God. Just as an example, in the past, King David killed Goliath under the influence of the Holy Spirit. Today, miracles still occur which is God working through men. A person might object that man is fallible, but man's fallibility does not limit God's infallibility. My point is, God wrote the Scriptures USING man and accomplished it perfectly.


B. The evidence that the Bible is God's Word can be divided into two categories.

1. The Impossibility of it Not being the Word of God

2. The Divine nature of the Book

I would absolutely love to go into details on all of these with you. Like I said, all you need is category one, even though category two may be impressive, you don't even need it.

Take care my friend. I think you emailed me, right? I will respond to your email as well.