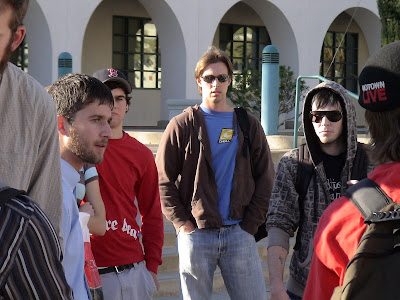 San Diego State University was really the first campus of this half of the tour, since our time in Las Vegas was spent mainly on the streets rather than in the world of academia. We had the great privilege of sharing this time with three excellent brothers: Steven Barry of Alpha Omega Outreach, Greg Gordon of Sermonindex, and Leon Brown of Evangelism Team; which was wonderful fellowship and a blessing to my heart. In all, we preached at SDSU for four very intense days.

Day one, Greg, Steve and I arrived on campus late in the afternoon and handed out tracts while Miles and Evan were helping some people who had car trouble. We spend a considerable amount of time in prayer for the following days ahead, that God would shake the campus and defend the honor of His holy Name.

The next day proved wild. Evan began preaching and in a short while had about 50 students crowded all around him, yelling and mocking. I got up to preach and soon there were two Rastafarian guys causing a lot of disturbance, trying to steal the crowds attention away from us (unfortunately these two men continued to come out to our meetings daily and disrupt the preaching of the Word... the devil at work). However, we continued on and though the crowd itself became divided, still many students heard the Word of God and the gospel of Jesus Christ and we saw a lot of conviction. 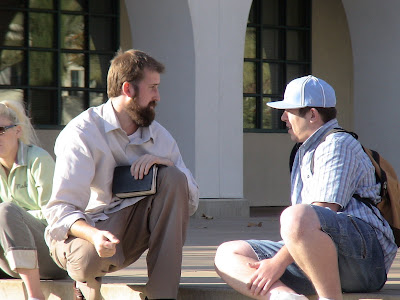 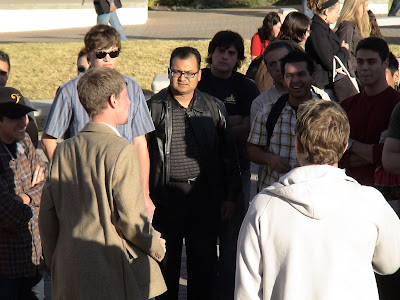 At one point when Evan was preaching, a student came forward smoking marijuana and blew it in his face.

I spoke with several people in particular who I believe came under true conviction of sin. One young man, a European student, discussed with me God and morality for about half and hour and finally came to a place where he had no grounds to stand upon his atheistic beliefs and acknowledged his difficult predicament. He immediately became anxious and walked away. Another young man, not actually a student but a sort of drifting hippie, talked with me for a while about his faith, for his parents were strong Christians and had raised him to be so, but he had walked away. At the end of our conversation he said, "Maybe I'm that prodigal son." All of us had awesome one-on-ones like this.

I believe our time spent at SDSU was not in vain according to our prayers. It saddens me to see so many young people totally blind and walking in darkness, full of sin and carelessness, but it is very encouraging when "the people which sat in darkness saw great light; and to them which sat in the region and shadow of death light is sprung up." (Matthew 4:16) May God raise up laborers to bring in the harvest in these perilous last days.

Praise the Lord Jesus Christ! Bless His Name forever and ever! Dear saints, please pray for me during this difficult trip... the work is great, the battle is fierce, the devil is roaring like a lion, millions and millions are going to hell, and without the power of the Holy Spirit we can do nothing. Pray for us that we would be filled overflowing with love, joy and peace; lighthouses in the billowing storm. 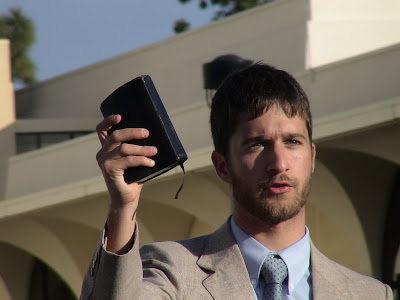 Praise God for the open door to share the gospel of our precious Lord Jesus Christ. I was privildged to co-labour with you and the open air outreach team. May God continue to grow and bless the testimony of what God is doing through your team on the campus's.

Amen, brother. I'll be praying for all of you guys.

Press on! We'll be keeping you in prayer bro! Micah and Katie

Bless God, great to see the Word continuing on the US campuses. Great to see brother Greg with y'all. Have a safe semester brother Eli.