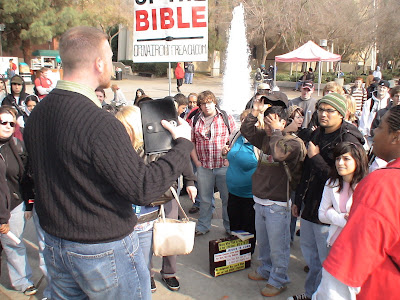 Fresno is known for being one of the roughest cities in California, and our experience there only proved this assessment to be true. There's really only one word I can think of to describe our day spent at the City College: madness.

While Evan decided to sit out this one, Miles and I (accompanied with brother Steven Barry), drove to the college in the heart of the inner city. After choosing our spot in the center of campus, we waited until the class change began then ripped open the banner and started preaching. It didn't take Miles one minute before he had a crowd amassed around him, and the chaos slowly began.

The first wave of attack consisted of the "we're up-to-no-good" crowd; the sex, drugs, rock 'n' roll guys who sadly don't exercise their brains enough. Their objections come in the form of: "Jesus made wine!" and "God made weed!" and "ONLY the Dark Side speaks in absolutes!"

Next it was the campus Christians with their technicolor Bibles shouting out their purpose driven accusations. "Thou shalt not judge!" and "Jesus never talked about hell!" and "You're turning people off!" Believe me, after 40 campuses, this gets old.

Then a U.P.C. student stood up and started preaching his version of Acts 2:38, followed by two witches singing their mantras and screaming "Burn all Bibles!" who were followed by a man with no teeth reading out loud the gospel of John. Everybody was shouting at the same time and the crowd had grown to fill one entire side of the central courtyard! Obviously Fresno City College had never seen a preacher before.

Finally, after we could bear it no more, Miles and I ducked out of the crowd and ran to the other side of the courtyard to shift the momentum of the meeting, which worked. The people followed us over to hear what we had to say. However, it was only a few minutes before the police arrived on the scene and closed everything down. Someone must have called 9-1-1 because we nearly had a riot.

So that was our day at Fresno City College; a total of 45 minutes of sheer madness. Although between blasts of venom and shrieks of incoherency, we did manage to preach the Word of God to the students. May God use whatever little seed was sown.

"And when they heard these sayings, they were full of wrath, and cried out, saying, Great is Diana of the Ephesians. And the whole city was filled with confusion: and having caught Gaius and Aristarchus, men of Macedonia, Paul's companions in travel, they rushed with one accord into the theater... Some therefore cried one thing, and some another: for the assembly was confused; and the more part knew not wherefore they were come together... And Alexander beckoned with the hand, and would have made his defense unto the people. But when they knew that he was a Jew, all with one voice about the space of two hours cried out, Great is Diana of the Ephesians." (Acts 19:28-34)

"But none of these things move me, neither count I my life dear unto myself, so that I might finish my course with joy, and the ministry, which I have received of the Lord Jesus, to testify the gospel of the grace of God." (Acts 20:24)
Posted by Eli at 1:54 AM

Yuck, and i thought that i've had bad days. THAT is a bad day. Just keep praying that God's word can be established within the hearts of those who heard your message, and not just the surrounding chaos. Phillipians 4:13 :"I can do ANYTHING in Christ who gives me my strength."

Keep doing what you're doing, and put the trust in God to take the message home to their hearts, where it truly belongs. God Bless, Eli

Thanks for the continual updates dear brother. Keep seeking God in fervent prayer for lost souls.

I miss you too, bro. I pray everythings going well with you :)

I haven't posted on here before, so please know I'm not being petty or needlessly critical: This is it, man. This is past the edge of Christian sanity. The 'madness' you are talking about - it's not the 'drunkards' or the 'sinners' - it's this wacked trip you're on. Eli Brayley: you need to step back and see what you just wrote. I can't help but feel that in the preaching of Jesus 'name' you've entirely missed His message. I miss you, bro. Wish you'd get back so we could chat.

In all things, Love,
-Andrew

That's alright, I know you don't understand what I'm doing, but regardless I must be obedient to Christ and preach the gospel. You would of had to have been there... it was really wild and a near riot, though we barely said anything.

We are preachers, not crowd control police :)

You are absoutly ridiculous, Andrew is right step back and look what you just wrote... "after 40 campus's that gets old" ITS THE TRUTH!..

Yup, it's true... but I love each and every last one of them regardless.

"But I say unto you, Love your enemies, bless them that curse you, do good to them that hate you, and pray for them which despitefully use you, and persecute you; that ye may be the children of your Father which is in heaven." (Matthew 5:44-45)

The Gospel must be preached.