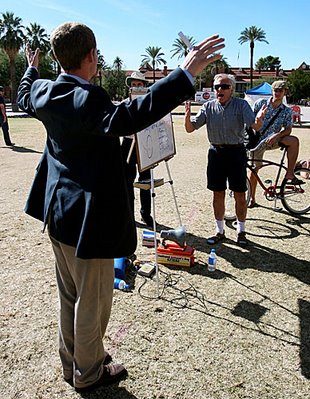 The picture above was featured in the University of Arizona newspaper, depicting brother Evan debating with an astrophysics professor from England named "Sharp, Christopher Sharp" (in his own accented words). I talked with him for over an hour, and even though he said many things I had absolutely no understanding of, I stood my ground on the Word of God and actually defeated his faithless arguments about evolution. "Professing themselves to be wise, they became fools, And changed the glory of the incorruptible God into an image made like to corruptible man, and to birds, and fourfooted beasts, and creeping things." (Romans 1:22-23)

UofA was a rather difficult campus to preach on due to it's sheer size and frequent visits from other campus preachers; not to mention the blazing hot sun and the want of relief from it. As well, a group of Hare Krishnas were demonstrating nearby to us and causing quite a scene. As they chanted and sang their gibberish, I was able to let out a rendition of "When I Survey the Wondrous Cross" to their distain. You can see them packing up below! 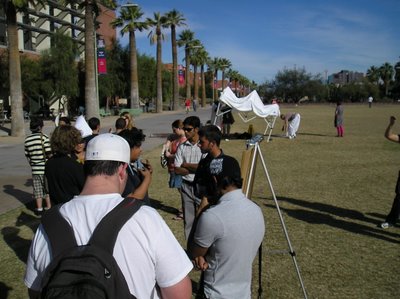 The meeting went well as we answered many questions about Christianity and preached the Gospel to the students. Two muslim guys had their mouths completely stopped so they resorted to just leaving the meeting in a huff. An athiest had nothing to say when put to the challenge about his moral relativism. One girl came under conviction as Evan witnessed to her. A homosexual man inquired sincerely about being free from sin. 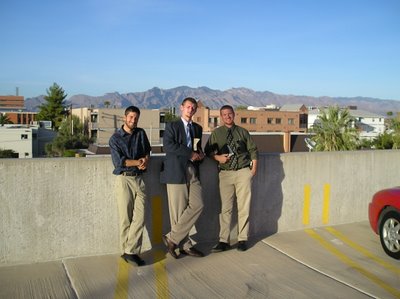 God bless you, saints. Please continue to pray for us that our Lord would give us utterance to proclaim the very oracles of God.
Posted by Eli at 3:04 AM

Keep it up brothers!

Eli... you grew a beard buddy!!!! Reading about your real life adventures is a nice break from school. And all the stuff you say its so "real"; Im not sure how else to put it. Its good stuff. Ive been praying for you guys and still am Eliazer. Take care old buddy and God Bless!

It was great meeting you! So glad you came through Tucson. Don't forget, whenever you come this way again, the door is always open.
~Tara