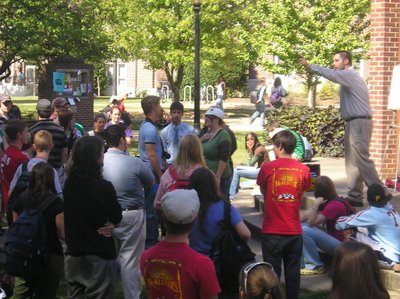 Our tour then took us to Arkansas for seven days, hitting two major campuses and also a bar district during the weekened. We met up with another brother named Josh Parsley (pictured above) who open air preaches in his hometown of Fayetteville. Not only that, but we lodged in the second largest building in Little Rock, the capital of Arkansas... a huge Institute of Basic Life Principles ministry building owned by Bill Gothard (very big in the U.S.). Basically we had a massive corporation building all to ourselves! Though Mr. Gothard owns the building, the majority of it needs to be redone, and the building is not in use save for the first two floors. It is hard to explain... big building, three preachers... but it's true. 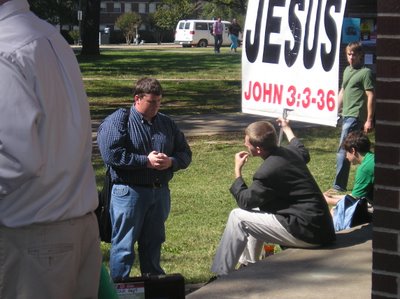 We had great meetings at University of Central Arkansas with large crowds drawing immediately and remaining for the better part of the day. On the first day one young lady was so convicted of her sins she burst into tears, tears falling from her face, and she stepped in front of everybody and confessed her sins. We were able to minister the grace of God to her! "The sacrifices of God are a broken spirit: a broken and contrite heart, O God, thou wilt not despise." (Psalm 51:17) 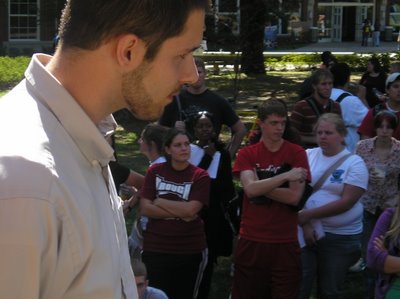 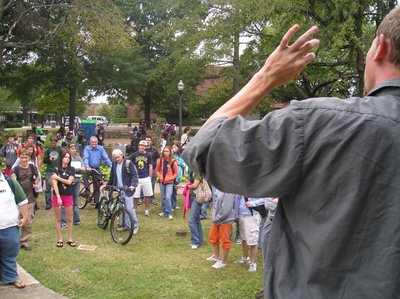 A professor of philosophy came out and opposed us on the second day. His arguments were totally absurd as he poisoned the minds of the ignorant students with his anti-Bible rhetoric. A sharp rebuke sent him away. "They be blind leaders of the blind. And if the blind lead the blind, both shall fall into the ditch." (Matthew 15:14)

We closed the meetings with a few songs which the people really enjoyed. May God cause an increase of His seed to grow on this campus; may His Word not return void. Glory to God.


More pictures can be found at http://www.openairoutreach.com/gallery/album27?page=1

It was a blessing to be able to fellowship with you. I have listened to the "Special Music" that is on google video. I was wondering if you have any audio recordings of music. I really like that "All We Like Sheep." At least that is what I think you called it. I'll try to get that audio of the preaching as soon as I get some more time.

Hi Eli, keep up the obedient work of going into all the world to preach the gospel...woe unto us if we preach not the gospel! I liked the pic in your report with the mammoth sign with Jesus name across it...I was also blessed to see the word 'repent' included in its text as opposed to just believe. As you know, repentance and faith are 2 sides of the same coin...'ya can't have one with out the other.'

Suggestion: if you posted a photo of your feet you might get a few more hits on your site "...as it is written, How beautiful are the feet of them that preach the gospel of peace, and bring glad tidings of good things!"

P.S. This song was on my mind the last couple days...seems to me the writer of it is from down south there somewhere. "Sweet Beulah Land". Hope the lyrics are a blessing to you...as Ravinhill would say...'stamp eternity on my eyeball'.

I'm kind of homesick for a country
to which I've never been before.
No sad goodbyes will there be spoken,
And time won't matter anymore

Beulah Land I'm longing for you,
and someday on thee I'll stand.
There my home shall be eternal.
Beulah Land... sweet Beulah Land.

I'm looking now across that river
to where my faith is gonna end in sight.
Theres just a few more days to labor,
Then I'll take, my heavenly flight

Beulah Land I'm longing for you,
and someday on thee I'll stand.
There my home shall be eternal.
Beulah Land, Sweet Beulah land...

Josh, thanks for everything brother. It was totally a blessing to meet you. I'll see about putting up some more music online; I've got some old songs I recorded a while ago that I could put up.

Always great to hear from you. Thank you for posting that song, makes me think of that Scripture, "Henceforth there is laid up for me a crown of righteousness, which the Lord, the righteous judge, shall give me at that day: and not to me only, but unto all them also that love his appearing." (2 Timothy 4:8)