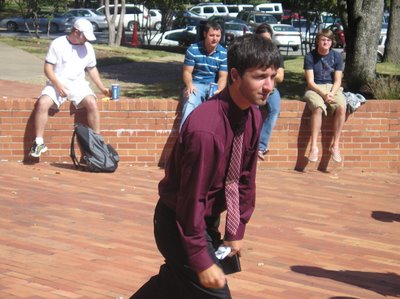 Once again, huge crowds gathered to hear the gospel being preached in the open air; crowds made up of every type of person under the sun: athiests, agnostics, Christians, buddhists, Muslims, Hindus... skeptics, socialists, homosexuals, fornicators, drunkards, blasphemers... the people came. It just so happened that the day we arrived at UALR was National Coming Out Day, or the day the homosexuals came out in force. The meeting basically got rolling when a shameless sodomite challenged Miles to a public debate and pulled out a his reasons why homosexuality was acceptable on a sheet of paper in defense of his sinful practise. The man claimed to be a Christian and attempted to use the Bible to justify his sin. "Professing themselves to be wise, they became fools." (Romans 1:22) Being in the Bible belt, it was refreshing to see about half the crowd disapprove of this man, where in other areas we would see entire crowds cheer and applaude any such opposer. 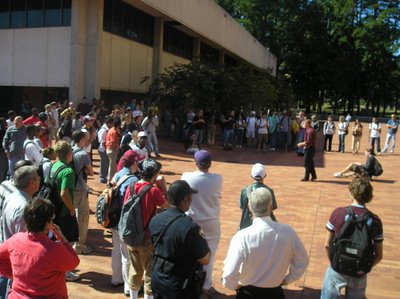 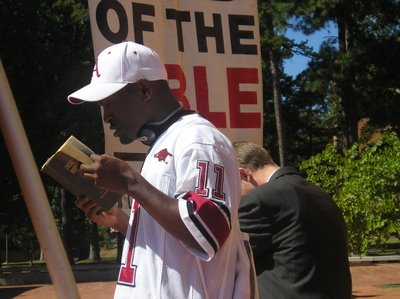 The whole campus was in a stir; lots of debate, lots of questions, lots of emotion... people searching the Bible for answers... God was definitely at work. 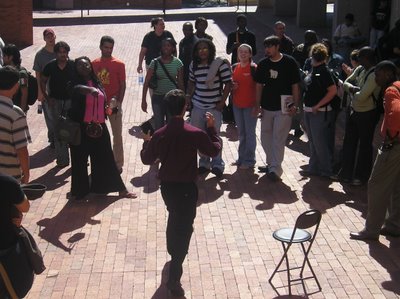 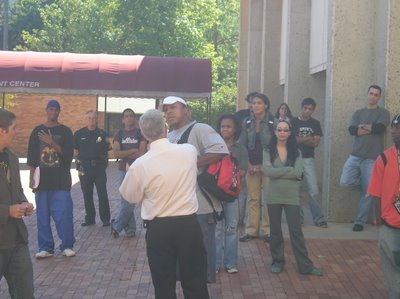 The man in the picture above was about to attack me but was restrained by an administrator and a police officer. "The world cannot hate you; but me it hateth, because I testify of it, that the works thereof are evil." (John 7:7)

Watch a video from this campus here.

Praise God for the seed that was planted and the fruit we saw at these meetings! Charles Spurgeon once called evangelism "that most royal employment." There is nothing greater than to lift up the banner of the Lord Jesus Christ against the world, the flesh and the devil. May the Lord raise up more laborers to fight the battle for lost souls and to reap in the harvest of these desperate last days. 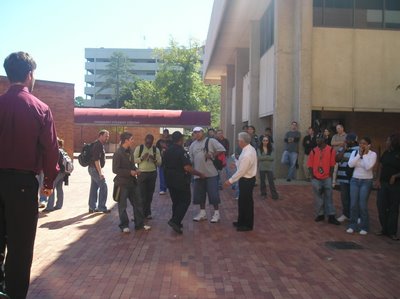 "When the enemy shall come in like a flood, the Spirit of the LORD shall lift up a standard against him." (Isaiah 59:19)