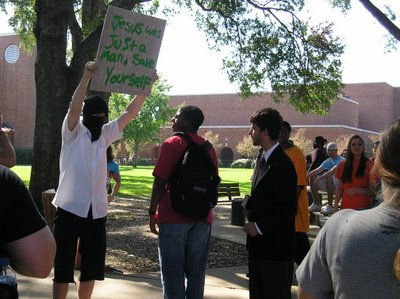 Our time spent at Tyler Junior College was of a different nature than normal. Last year, Jesse Morrell and Jeff Olver of Open Air Outreach were arrested for preaching and banned from campus, and so we headed for TJC aware of the consequences that might follow. Brother Miles started the day off preaching, and it wasn't even 15 minutes until the police arrived on the scene.

Having been given the order to leave campus, we negotiated with them to allow us a trip to the administration office to obtain permission to preach. This was grudgingly granted. Miles and I spoke with an administrator who told us that we needed to be sponsored by a student group in order for us to be allowed free speech. This is totally unconstitutional! However, we decided to play their game and headed for the Baptist Student Association to gain sponsorship. 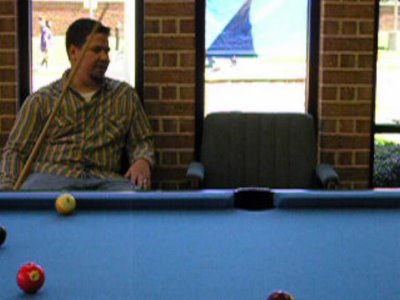 Needless to say, the Baptist Student Association were not willing to sponsor us after hearing that we are open air preachers; they take the more "relational" approach. 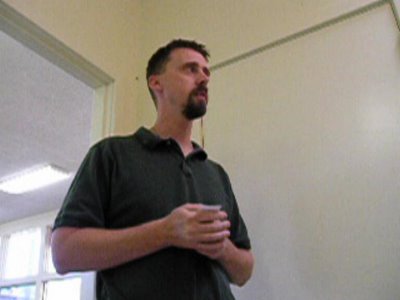 Nor did the Wesley Foundation want anything to do with us. I asked the leader of the Foundation what exactly they did. His answer... "We bake cookies". I'm sure John Wesley would be proud.

Having attempted to gain sponsorship from the Christian organizations on campus and failed, we were not about to simply leave campus. After all, the Mormons were walking around proselytizing unhindered... We headed back for the administrator.

When we walked back into the office, they told us that the chief administrator was going to see us, so Miles and I entered the office of Mr. Fred Peters. He sat us down and straightway said to us, "I'm giving you the authority to preach on campus." Surprised, we asked again, and inquired if this was also valid for any future meetings, and he noddded his head! Open Air Outreach had just busted the closed door at Tyler Junior College wide open!

The funny thing was, when we started preaching, the police showed up and commanded us to stop. We told them we had permission from Mr. Peters but they didn't believe us. So they hauled us up to Fred's office and stormed in through the door expecting to see us busted. You should have seen the look on their faces when they heard the chief tell them he had given us permission!

The meetings were great afterwards. Many people heard the gospel and many Christians were fired up for the Lord. Praise God!

"And I saw another angel fly in the midst of heaven, having the everlasting gospel to preach unto them that dwell on the earth, and to every nation, and kindred, and tongue, and people, Saying with a loud voice, Fear God, and give glory to him; for the hour of his judgment is come: and worship him that made heaven, and earth, and the sea, and the fountains of waters." (Revelation 14:6-7)
Posted by Eli at 6:22 PM

unbelivable how many are lukewarm and have been brainswashed into a un-biblical chrisitanity. Baking Cookies? what a joke. we need hell-fire preachers again.

eli, i pray that you feel abundantly blessed as you are a blessing to others. you have certainly and continue to be a blessing to me. you're in my prayers brother, we miss you, in Christ, jw

That was a beautiful example of how honor can open closed doors and closed hearts.

I am very proud of you for taking a stand Eli. I am struck by the coldness of the our supposed "brothers and sisters" in Christ. I miss you very much and think of you often.

Hey Eli!
It's William your cousin, I read about you getting attacked by that guy. I hope that your not hurt too bad.

Well I will talk to you later