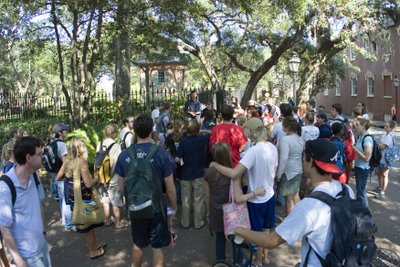 Greetings to all friends and readers abroad,

Yesterday concluded our final meeting at College of Charleston, Charleston, South Carolina, wrapping up a series of intense meetings which lasted four days and saw no small share of good fruit. However, with this fruit came a blaze of opposition, right from the beginning. 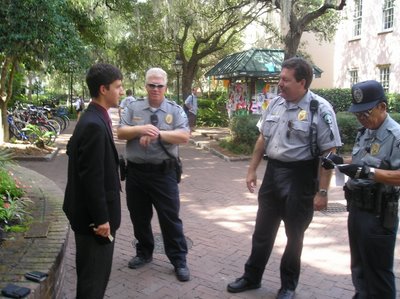 When we first arrived I began to preach and immediately a crowd began to form, but no longer than a few minutes into it the public safety officers surrounded me and ordered us to move someplace else. We had to set up on the sidewalk outside this 'public' campus.

Speaking of this campus, I have never seen such a beautiful one, nor such an agreeable looking city. Until now I was solely accustomed to the Atlantic Canadian environment, but it has been a blessing to see so many different trees, including palm trees, adding more to God's wonderful creation. The weather here is also very warm, but with all the large and vitalic trees everywhere there is plenty of shade making this region a pleasant place of residence! But, back to the report... 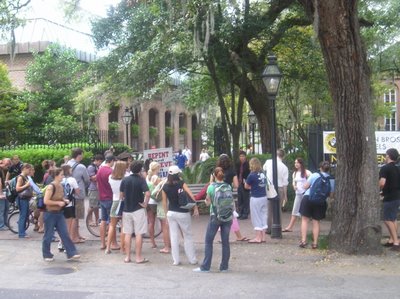 Regardless of being on the sidewalk, we drew large crowds every day, especially on the third day, when the entire area was packed with students running both up and down the street. During the commotion of the third day, my guitar was stolen along with our briefcase which contained tracts, Bibles, a Qur'an and a Book of Mormon. Also, our eraser board and banners where violently thrown into the streets, Evan was hit across the face, and I was threatened to be beaten up by a much heavierweight individual. It was because we preached the gospel so strongly that mulitudes were getting convicted and their only defense was no longer in arguing but in attacking. 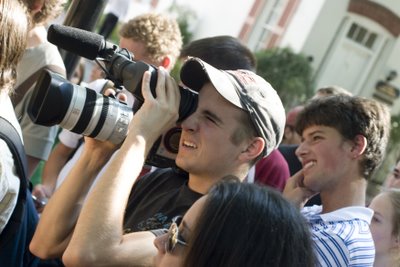 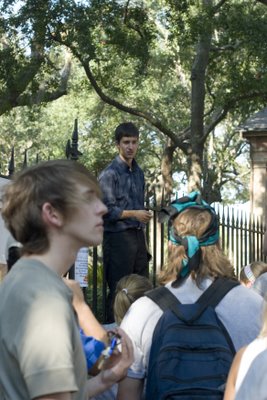 The crowd was so big at one point and were pressing in from every side that I had to jump up onto the railing in order to continue to preach. The picture below is actually down the street from where Miles and Evan were holding the meeting. 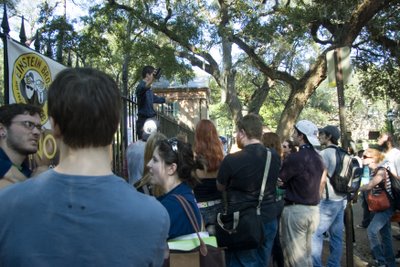 During our stay at College of Charleston the students asked me to tell them of how I came to know the Lord and I was honored to be able to share my testimony, which Miles was able to capture on video. The following video is my personal testimony given at CofC to a captive audience of curious sinners. "Go... and tell them how great things the Lord hath done for thee, and hath had compassion on thee." (Mark 5:19): Eli Brayley - Personal Testimony

After realizing our things had been stolen, we praised God and said, "The Lord giveth and the Lord taketh away: Blessed be the Name of the Lord." On Thursday morning, the phone rang; it was the police. They had found our things and not a single item was missing. Praise God! 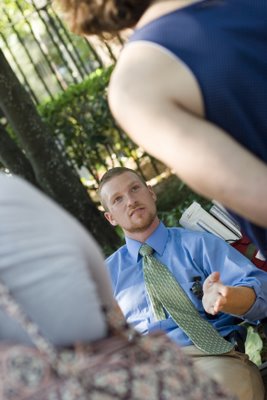 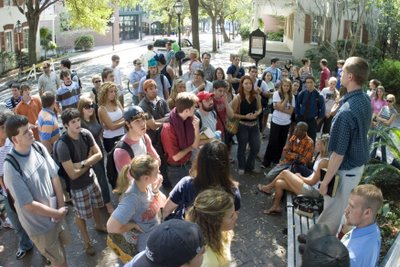 This campus was totally shaken. Glory to God for the work He is accomplishing through this pathetic ministry team. God bless you, dear friends. May the Lord keep us all strong in the power of the Holy Spirit. Be jealous for His glory! Sincerely,

Your brother in Christ,
-Eli 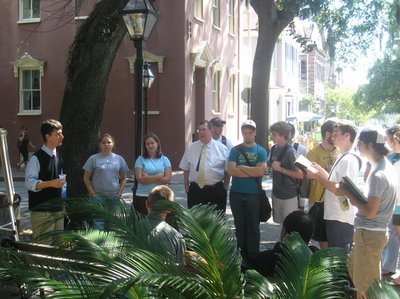 That's awesome that God found your stuff for you! I know that guitar was a gift from God! Keep it up man! Very exciting! I can't wait to hear your testimony.

Wow, Eli! We loved the testimony. You've shared it with us before, but it was just so awesome to hear it again. We are so proud of you. We are delighted to see what God is doing in you and through you. Oh, may God bless you brother and may you continue to do a mighty work in His Name.
You're in our prayers.

Thank you Micah, Adam and Karen; Bless you guys!

You bet that guitar was given to me from God! In the same way I knew I would get it, I knew also I would get it back when I heard it was stolen. Hehe, God is so good. :)

Blessings y'all. (That's southern US for ya.)

Eli my man.. andy jones from fredericton here. I am following your great adventure with interest. The Lord has chosen to give you an interesting path has He not? I will continue to follow your journey's and will start praying for you as I do my daily deliveries in the early morning. I will also download some Ravenhill and others to listen to on ,y Ipod. Pray for me also that our great and mighty Redeemer will set my heart aflame. DEAL?...love andy. PS the racoons ate almost all of my grapes this year!!!!