Lessons from the Life of Samson: Are You Moved? 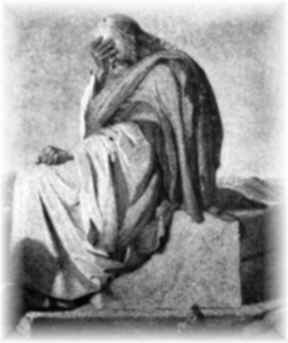 "And the woman bare a son, and called his name Samson: and the child grew, and the LORD blessed him. And the Spirit of the LORD began to move him at times in the camp of Dan between Zorah and Eshtaol." - Judges 13:24-25
At the time little Samson was born, Israel was under the subjugation of the pagan nation Philistia, who had prevailed against them for a long and hard forty years, and would continue to do so even after the massacre at the temple of Dagon. The prophecy given by the angel to the parents regarding the boy was that "he shall begin to deliver Israel out of the hand of the Philistines." (Judges 13:5) The wicked Philistines would remain a thorn in Israel's side even into the days of King David. Israel had sinned in the eyes of the Lord, choosing the carnal world over the holy and righteous God, bringing upon themselves this depressing scenario of national judgment. The Philistines were cruel masters who hated the Israelites and treated them with contempt.

And so Samson was born and raised in this environment of abnormality, not in the standard which the God of Israel had planned for His beloved people. The Lord had promised them a land flowing with milk and honey, peace and safety, victory against their enemies... but most important and inestimable of all: the Lord had promised His divine presence to be with them; the glory of the Lord in the midst of His people. Now all these things appeared to be lost. Where was God? For forty years He remained silent; memories of Moses seemed so faint, the miracle at the Red Sea felt so far away. It is in this context that we find an intriguing and thought-provoking Scripture from Judges 13:25:

"And the Spirit of the LORD began to move him at times in the camp of Dan between Zorah and Eshtaol."

Here is Samson, probably around 30 years old, seeing the condition of his home and family while knowing the Scriptures and covenant of God, and the Spirit of the Lord begins to move him: moves his spirit for sorrow of failure, moves his soul for longing after God, moves his anger hot against the uncircumcised Philistines, moves his eyes to tears over the desolation of his people... Here was a young man upon whom the Spirit was working. Oh, is the Spirit working upon you today? Do you feel the moving of the Lord upon your hard and fallow heart? Do we not live in a country of spiritual enslavement with masters more ferocious than earthly kings and princes? Oh Christian, is the Lord moving on your heart to grief? Pray God to stir us!

Notice now that Samson does not take any action at this point. This was not the time for brash prosecution. This was the time of God dealing with the man in preparation for His application. When God moves His people we can expect God is about to move. And so it is we find out next in chapter 14 God initiates the beginning of the fall of Philistia. Samson goes to find a wife to the south "but his father and his mother knew not that it was of the LORD, that he sought an occasion against the Philistines." (Judges 14:4) This episode would end in the slaughter of 30 Philistines, the start of a devastating mini-war between God's man and the captors of Israel. It was also on the road to Timnah that Samson first realized his tremendous strength.

There are many of us who are not concerned about the crisis around us. This is either because of ignorance or indifference towards God and His Word. They care not that the people of the world are captive and that the people of the Church are crippled. Rather, they are enjoying their comfortable easement, having both a little bit of God and a little bit of godlessness. Unmoved and unaware, they will soon find out that this status is not acceptable.

But then there are those of us who long for the presence of God in our lives, who groan in hope for the manifestation of His glory, who see the world around us and are grieved by the absence of the standard of His purposes. These are those who are moved by the Spirit between Zorah and Eshtaol. Holy anger or sorrowful weeping... the yoke of bondage and the absence of the Lord is too much to bear in light of the glorious liberating cross.

Take courage, good Christian! Lift up your head for your redemption draweth nigh! These are but the signs of awakening; the heralds of deliverance to the ones in captivity. God is in the business of setting loose the oppressed: "The Spirit of the Lord GOD is upon me; because the LORD hath anointed me to preach good tidings unto the meek; he hath sent me to bind up the brokenhearted, to proclaim liberty to the captives, and the opening of the prison to them that are bound; to proclaim the acceptable year of the LORD, and the day of vengeance of our God; to comfort all that mourn; to appoint unto them that mourn in Zion, to give unto them beauty for ashes, the oil of joy for mourning, the garment of praise for the spirit of heaviness; that they might be called trees of righteousness, the planting of the LORD, that he might be glorified." (Isaiah 61:1-3)

The Lord will always answer those who yearn for His deliverance. The question is: Are you moved?
Posted by Eli at 9:16 AM

What a great word Eli! Thanks so much.